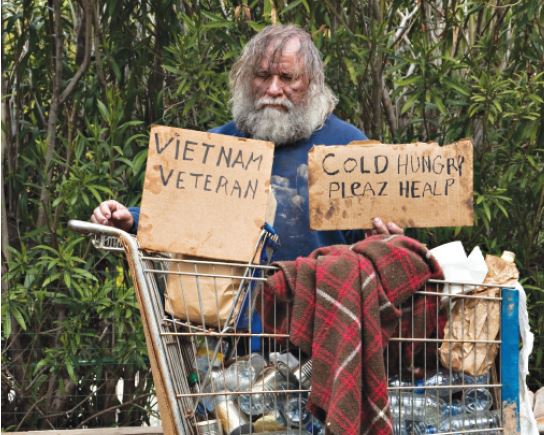 Homeless in Clairemont
by Janet Miller

We have all seen them in our neighborhood, the homeless of Clairemont.  Sometimes they are on a street corner with a cardboard sign, or standing near a convenience store asking for change. More intimidating are those who are camped out at the bus stop on your block with a cart full of their belongings, or living in a group down in the canyon behind your house.

Have you wondered where they came from or why they are here in Clairemont? Are you curious about what is being done to help these unfortunate people in our community? 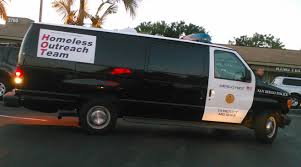 The HOT team is an innovative approach to the problem of the homeless in our community.   As Sgt. Schnell explained it to me, the idea behind HOT was to bring together a group of professionals with a goal of helping the chronic homeless get off the street and into a stable housing situation instead of simply arresting them over and over.   “My team has 4 police officers, 2 health and human services specialists, and 2 PERT clinicians”, said Sgt. Schnell.  “As a team we can respond to mental health issues, drug and alcohol abuse and a host of other problems plus help facilitate placement in a variety of programs depending on what the individual’s needs are.”

The HOT team gets involved when they are called out by SDPD’s Northern Division, either in response to a citizen complaint or prior to an enforcement action by the PD.  “We’ll go down in the canyon and talk to these people first,” said Sgt. Schnell, “We let them know they have to move or they will be arrested and most are compliant. The unfortunate thing is when they ask ‘where can I go?’ there is no place I can tell them to go. This is a huge problem.”  San Diego has no shelter beds available most nights, and there is no place one can legally sleep outdoors in Clairemont.

Because Clairemont’s homeless population is almost exclusively made up of alcoholics, the PD’s SIP program is very important to our community. As with the HOT team, the goal is to get the serial inebriate into a treatment program leading to sobriety.

Sgt. Schnell explained to me how important it is for the SIP program to be presented to the alcoholic right away in jail. “When they go to jail they are in crisis. They need somediv to step up and say ‘Where do you want to go from here? Here’s your options, here’s treatment and we will work with you to get it going’, before they get comfortable in jail. Not all of them agree the first time; they aren’t willing to get sober and they think they can tough it out in jail for 30 or 90 days, “said Sgt. Schnell, “ But for those who do agree the program has been very successful. We average about 200 a year through the SIP program, and 50% are getting sober and moving on”.

And what of the “signers”, those (mostly) men on street corners asking for help?  Does it help to give them money or will they just buy drugs?  Is it true they make tons of money doing that?
“If it makes you feel better to do it, then it doesn’t really hurt anything. But a lot of the guys you see out there are getting checks each month, whether disability or Social Security.  When we ask them why they do it, they say they are bored,” said Officer Liening.  “It gives them something to do, a little supplemental income, and some folks kind of get to know them, maybe drive by everyday and bring food or whatever.”

I’d never thought of it that way, but it made sense that not having a job, a home or family would leave one with a lot of time to do nothing. Sgt. Schnell agreed, saying “Being homeless is cold, lonely and boring. I call it a parallel universe; they are in theirs and we are in ours. It’s when they cross into ours or vice versa that creates disturbance, and that’s when you call the police. “

I asked Sgt. Schnell about what the rest of the Clairemont community can do about the problem of homeless drunks living in our neighborhood canyons.  Although he stated that “99% of the people we talk to in Clairemont are harmless”, Sgt. Schnell cautioned that “Citizens should never intervene themselves. If you see a problem, if you see people living in the canyon, just call the police.”

We also need to ask ourselves as a community how we want to handle the issue of the serial inebriate homeless among us.  The SIP program is effective; so much so that Sgt. Schnell and Officer Liening have been asked to teach other cities how to implement a SIP program.  Yet it needs vocal support from the community as funds for social services are often in jeopardy.

Sgt. Schnell, Officer Liening and their teams are working hard to help the unfortunate among us. Their pragmatic yet compassionate approach is a positive response to a problem we all are affected by.   I hope the community will let our City Council know that Clairemont supports HOT and SIP.
Email ThisBlogThis!Share to TwitterShare to FacebookShare to Pinterest