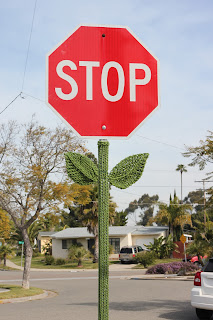 Regular readers of the Clairemont Community News will remember the delightful 100 Stop Sign Flowers project.  According to Knitting Guy, who was the leader of the band of merry knitters who volunteered their time and talent to brighten up Clairemont, the 100th flower was planted April 22nd.

The next day, Knitting Guy was contacted by Bill Harris with the City of San Diego who said the flowers must go.

According to an email from Knitting Guy sent to backers of the project, Harris started the call with "Congratulations on making it to 100". Harris explained how people within the City had gone to great lengths to find a way to keep them. They even contacted other cities to find out what they did. "Even Berkeley takes them down", he told Knitting Guy. The problem is that the stop sign is a traffic sign.

Says Knitting Guy, "It's really cool they let us finish, and that their first reaction was researching a positive solution. But, now we have 10 days to remove them. After that if a city worker comes across one they will remove it. I am still coming up with the details, and I welcome any suggestions. "

Councilmember for the Clairemont area (and resident) Lorie Zapf has heard from a number of constituents who are dismayed at the idea of losing the flowers.  Lorie is requesting that supporters of the flower stop signs email her at loriezapf@sandiego.gov in an effort to get City staff to change their minds.

The City is forced to announce that the Stop Sign Flowers must come down. Even with the great community spirit this effort has generated, there are just too many restrictions to overcome. City staff looked through state law and local policies trying to find some way of allowing the flowers to remain in place. Unfortunately, particularly with traffic control signs and including all other City assets, there is just no way to retain the works where they now are.

We hope that the flower-makers will work with other site owners – private businesses, other agencies, business improvement districts and community groups – to find new homes for the flowers. This is a fun program that should easily capture the imagination of our communities in other, less restricted, locations.

City crews will not remove any of the installations for the next ten days unless they become a hazard. It is hoped that those who originally installed the flowers will take that time to remove and preserve the work. Following the ten day period, City crews will be instructed to remove and dispose of anything affixed to City assets as it is seen or reported. The yarn and leaf structures cannot be saved when removed by City staff.

(billharris@sandiego.gov)
Email ThisBlogThis!Share to TwitterShare to FacebookShare to Pinterest