Hello, I'm Shane Whitney, a ten-year-old Cartoonist who draws "Nate" comics, which are occasionally shown in the Clairemont Community News. (You may have seen them before.) This is my first post on the Clairemont Central Blog and I thought I might show you a little Comic and explain how Nate became part of our local newspaper.

Four or five months ago I was reading the comics in the newspaper. Thinking of the comic business I had started recently I thought I should try to get some publicity by getting my comic in the newspaper. I realized though that an Eagle-eyed syndicate with not much spare time on their hands probably wouldn't pay much attention to a young wannabe cartoonist. So instead I thought of an easier way to get my comic strip out there. Instantly I thought of the Clairemont Community News. Not only were they more likely to accept my comic strip, but they also didn't have one to begin with! (I think all newspapers should really have a comic.) So I ran to my desk and wrote out a letter explaining the reasons I thought of to say why they should have me. About one week later I got a letter back. I ripped open the envelope like a fiend. I was soooooo thrilled to learn that they were interested. Plus, they were also going to send over their editor, Janet Miller, to interview me. She put an article about me in the newspaper with a comic, and the rest is history.

Thanks for reading this, if you like the comic below than please subscribe to Nate. If you do you will get a monthly newsletter for a whole year, with a comic, update, and activity. You will also get to participate in contests! And much, much, much more. For just $5.00. 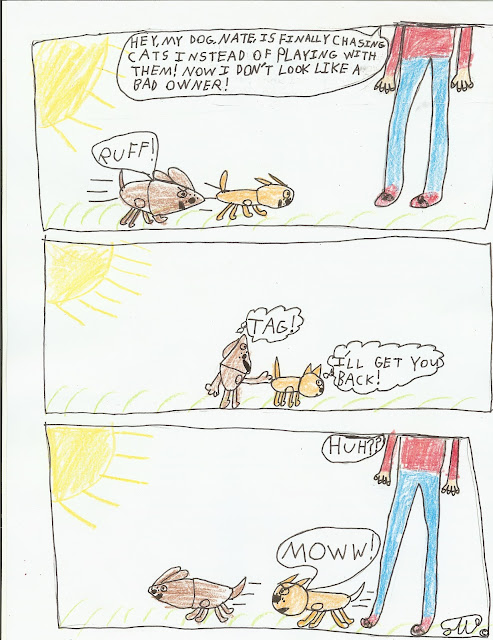