The Sheriff's Department is joining law enforcement agencies in California to increase public education and enforcement during this month. Drivers who use cell phones are four times as likely to get into crashes serious enough to injure themselves. The California Office of Traffic Safety or OTS says at least 80 lives in California were saved and 5,000 injuries prevented in just the first two years since a ban on hand-held cell phone use was enacted back in July 2008. 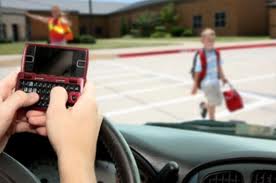 Sheriff's Deputies will be conducting a Zero Tolerance Campaign from April 9 to 13.  The fine for a first offense of texting or using a hand-held cell phone while driving is $159 plus court fees, with subsequent violations being much higher.

Remember, one call or text could wreck it all.

Turn off your phone or put it out of reach before starting the car.
• Alert callers that you are unable to take calls when driving by changing your voicemail message.
• Make it a point not to call or text anyone who may be driving, such as during the commute to and from work or school, especially parents calling teen drivers.
• If you do need to make an important call or respond to a text message, pull over to a safe place to do so.
• If going cold turkey is too much of a stretch and you just can’t turn off your phone, consider using one of the available mobile phone apps that holds calls and incoming texts.