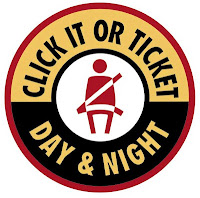 The 2012 start-of-summer "Click It or Ticket" seat belt enforcement mobilization kicks off May 21st to help save lives by cracking down on those who don’t buckle up.

The San Diego County Sheriff's Department is joining with other state and local law enforcement officers to help save more lives by strongly enforcing seat belt laws around the clock. Seat belts are the most effective piece of life saving equipment on your car.

“Too many drivers and passengers on the road at night are not wearing their seat belts, and it all too often ends in tragedy,” said Sheriff Bill Gore “Our goal is to save more lives, so deputies will be out enforcing seat belt laws around the clock.”

Seat belt use saves thousands of lives across America each year and the Sheriff's Department is helping spread the word. Statistics from the National Highway Traffic Safety Administration or NHTSA show that in 2010 alone, seat belts saved an estimated 12,546 lives nationwide.

Yet, too many motorists may need a tough reminder. 22,187 people were killed in car crashes in 2010 and 51 percent of them were NOT wearing seat belts at the time of their fatal crashes.

While this year’s Click It or Ticket enforcement mobilization runs from May 21st through June 3rd, drivers should know that officers are out enforcing seat belt laws year-round. Total costs for a first time ticket are at least $142.