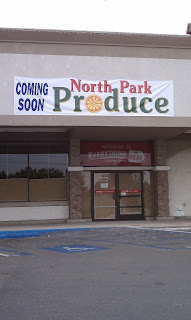 It's official, North Park Produce is coming to Clairemont!

The store will be located in the eastern half of what was most recently a clothing store called "Everything's a Deal" at the corner of Balboa and Clairemont Dr.  Longtime Clairemont residents may remember this as the site of the "old" Albertson's grocery store.

With locations in North Park and Poway, the company's website says it
specializes in providing the widest variety of farm fresh produce, including all the traditional items as well as hard to find regional, ethnic, and exotic produce. In addition, North Park Produce stores feature meat and deli departments as well as a great selection of groceries from all over the world.

The opening date hasn't been announced but look for the "Grand Opening" signs around the end of July!