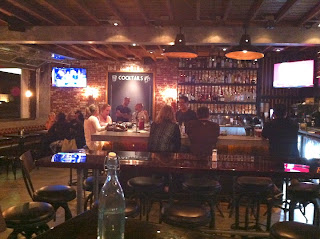 After many months of renovation, Luce Bar and Kitchen has finally opened its doors in Bay Park. “Luce” means light or brightness in Italian, and that’s exactly what owner Tony D’Amato hoped to introduce into this space that was formerly Da Nino’s Pizzeria. Located on the corner of Morena and Ashton, this new restaurant is an example of latest category in the restaurant business: casual-but-upscale eateries called gastropubs.

The interior is a cozy industrial mix of concrete, wood and garage-style rollup windows. There are four large screen TVs, making this location ideal for Charger fans to grab a Manzanita IPA or Serrano-Rita cocktail at game time. The cocktail, wine and microbrew list is the cornerstone of their inviting pub-and-grub approach.

For my inaugural visit, we sampled the house bruschetta, steamed mussels and a margherita pizza. The bruschetta ($8) included two varieties that exploded with flavor and freshness, served on hearty, smoky grilled bread: fig compote with ricotta cheese and a balsamic reduction; and heirloom tomato, mozzarella and pickled red onions. Served with a glass of red wine, this “small plate” could almost make a meal! The generous bowl of steamed mussels ($10) was soaked in a garlic, white wine and fresh tomato broth that was heavenly. Be sure to ask for extra bread to soak up the juicy goodness left behind. And finally, the margherita pizza ($11) was simple and just right. The pizza was especially tasty since it was prepared in a brick oven and included a fresh tasting, hand-tossed crust topped with fresh mozzarella and basil leaves. 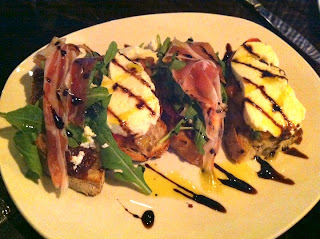 Other delectable and noteworthy dishes that were on the menu include the Luce burger with sharp cheddar, arugula, carmelized onions and heirloom tomatoes ($12); escargot and pesto pizza, or fig and gorgonzola pizza ($13); and drumstick pork chops ($6). Making this Chowhound howl with guilty pleasure: everything on the menu is under $20!

In all fairness, this newly-opened location may still have a few minimal kinks to iron out, but the décor, the small-plate, affordable menu and the vibe make this well worthy of a visit. Luce is now open for lunch from 11-2:30 and the kitchen reopens at 4 for the dinner crowd. 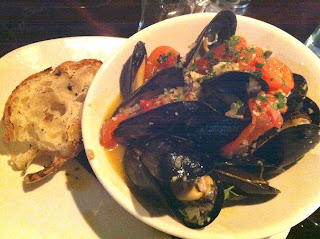