One of the nicest things about living in Clairemont is the (usually) temperate climate. However, August 2012 in Clairemont was hot and thirsty weather. 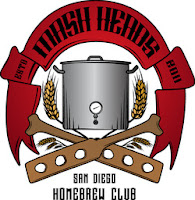 Fortunately there are a number of San Diegans who are diligent in crafting the cool refreshment I was seeking and which is the focus of one of San Diego's fastest growing hobbies: home brewed craft beer. I recently attended the Mash Heads Home Brew Club first anniversary fundraiser and tasting party at the home of Jamie and Tricia Gallant in North Clairemont and forgot all about the hot weather.

Mash Heads is a small San Diego based homebrew club dedicated to educating members on the science of homebrewing while focusing on fun and camaraderie. With a mission to promote awareness and appreciation of all aspects of the brewing process, they are members of the San Diego Homebrewers Alliance and the club is comprised of members from all over San Diego County.

Speaking from experience, they know what they are doing and do it well. In addition to brewing, members are trained in beer judging and learn through education, evaluation, and open discussion. The proof was in the glass!

For a small cover charge, the fundraising event presented opportunities to taste and share the many varieties of craft beer lovingly created by club members and other interested home brewers. Along with the beer tasting, there were a series of raffles for items donated by the following sponsors: The Homebrewer; Stumblefoot Brewing; Aztec Brewing; Hydrobrew; Mother Earth Brewing Company; White Labs Yeast; AleSmith Brewing Company; Societe Brewing Co, Local Habit and Taylor Guitars.

There were six home brews on tap, as well as many other bottled homebrews and even a couple of meads available to taste. These were well-done offerings that ranged from a light hefeweizen and several pale ales to coffee stouts and a great porter. All in all, a lovely afternoon spent with mash enthusiasts and brew lovers. With any luck the second anniversary party will be held in Clairemont again next year! For more information visit www.mashheads.com .
Email ThisBlogThis!Share to TwitterShare to FacebookShare to Pinterest