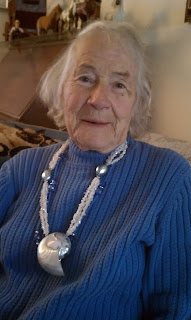 Each year in November, the month of giving thanks, Americans honor our military veterans. The 11 th of November has been set aside as a time to reflect on the commitment and sacrifice made by each man and woman who has served our country in the military.

In Clairemont, this day is extra special because our community is home to many veterans, from all time periods and from every branch of the service. Most of us Clairemonters know a vet who lives here—a neighbor, co-worker, a family member—but how many know about Clairemont’s answer to Mata Hari , Nellie Gephardt Arrigo Amondson?

I sat down with Nellie, a retired math professor, to ask about the rumors I’d heard that she was a spy during World War II. “It’s true!” she said with a gleam in her eye, and she told me her story.

Nellie told me she was just a 20-year-old coed studying math and physics in 1941 when she was recruited to work on a secret code-breaking project through the University of Colorado in Boulder. That was the beginning of a WWII adventure that took her across the sea, up in the sky and sneaking through the German-occupied woods of France as a spy in the Women’s Army Corps (WAC).

To meet Nellie today, who is a lively smiling 91-year-old, one would never know that as young woman she learned to fly planes small enough to land on a country road and large enough to carry artillery. Nellie learned how to jump out of them as well! She had spy training that included shooting guns, driving cars very fast and she studied explosives so she could blow up a train track if necessary.

Once trained, “I worked closely with General Patton, flying arms from Britain to the front, and returning with wounded soldiers,” Nellie said. She developed local sources in the French Resistance behind the lines that gave her information useful to the Allies. “One time, a Nazi in a local prison told his son in Germany, who had just been drafted, to “buy angora socks”, she said. “I brought this information to Patton who knew this meant the Germans would be making a push somewhere cold, and indeed the Battle of the Bulge was fought that winter.”

Another assignment had Nellie rowing a small boat a long way down a river, posing as a French girl, in order to determine which of 3 bridges would be strong enough for our tanks to cross, and to verify that they weren’t mined. Nellie walked back to the front with the information that allowed those tanks to make it across the river.

As you might imagine, Nellie has many more exciting stories of her time as a spy in Europe and Britain during the war. “I met Pattton and Churchill and was shot at and bombed,” Nellie told me. When I asked her how she felt about the experiences she’s had, she said “I think war is immoral. I think countries ought to be able to negotiate things between themselves without anyone getting killed.”

After leaving her spy days behind, Nellie had a long career in education, starting as a first grade teacher in San Francisco and retiring in 2002 from Mesa College’s math department. These days she enjoys attending Kiwanis meetings, spending time with her daughters and an occasional yoga class.

Clairemont, I hope you will join me in saying “Thank You!” to every vet you meet this month, especially our hometown veteran spy, Nellie Amondson!
Email ThisBlogThis!Share to TwitterShare to FacebookShare to Pinterest