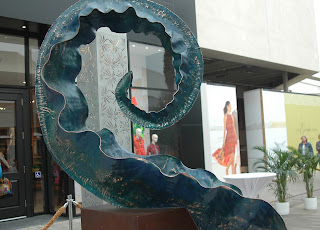 If you did any shopping recently at UTC you may have seen the large metal sculpture shown here. Perhaps you enjoyed it or you might have wondered what it was supposed to be, but I bet you didn’t know it was created by lifelong Clairemont resident and Clairemont High grad Pat Downing. Downing is an award-winning metal artist who was commissioned by Westfield UTC to create the piece as part of the recent redesign of the mall.


The sculpture, which is untitled, was made of one 10 foot by 3 foot sheet of copper. The process Downing used to transform a flat sheet of metal into the curving, 3-dimensional flared shape is called Foldforming. The sheet is repeatedly heated (annealed) so it is soft enough to be folded in half, then hammered into various shapes and finally unfolded. “There are something like 10,000 blows with the hammer on this piece,” said Pat, “Each blow makes the metal harder.” Foldforming has been likened to origami, the Japanese art of paper folding, but with metal.

While Pat had been working with metal and making sculptures since 2001, the largest one until now was a mere 14 inches tall. The challenge of expressing himself in a much larger format (the piece at UTC is about 6 foot tall) was part of what intrigued him about this commission. In addition, Downing believes it to be the largest work made with the Foldforming process. 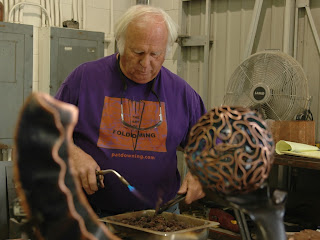 The color you see on the sculpture is called a “patina” and Pat has applied a number of layers of blue and green patinas, recalling the colors of the waves in the ocean. As you might expect, Pat is also an expert in creating unique finishes with patinas. In fact, he is certified as an instructor for the California Blacksmith’s Association (CBA) and teaches classes on Foldforming and copper patina creating.

Now you might be surprised to hear that there are still blacksmiths in these high-tech days, enough of them that there is an Association, with classes and certifications. Pat Downing is well aware of the blacksmithing community; in addition being an artist, he is a blacksmith himself as well. You can find him demonstrating traditional smithing on Tuesdays and Thursdays in Old Town State Park while dressed in 1850’s attire.

How did Pat, the son of Pearl Harbor survivor, and an alumnus of Bay Park Elementary, become an award-winning metalsmith? I asked him about his path to this level of success as an artist.

“I tried a bunch of things in my previous life,” Pat said, “but the two constants were working with my hands and cooking.” For a decade he sold restaurant equipment, but as the economy soured he looked elsewhere and took a job with an architectural metalsmith working on projects for ultra-high end homes: big fancy doors, railings and hardware.

For three years business was good; there was a huge waiting list for the company’s work. Pat was taking metalworking classes in Vista at the Antique Gas and Steam Engine Museum, which has the biggest blacksmith barn in the U.S. According to Pat, they teach more people metalsmithing than anywhere else.

“I’d been working with wood, with metal, trying this and that, but ultimately I settled on metal and it progressed rapidly from there,” Pat told me. “When the economy changed, there was less work for the high end so I started working in Old Town. It gave me the opportunity to keep my skills fresh, experiment a little and keep fit. Plus it gives me time to work on my own projects.”

Among them are making some small Foldforming pieces for a gallery in Laguna Beach, mostly notebook covers and card holders. He also has a potential commission for a 4-ft-square birdbath that would also be Foldformed. “What I’ll do for that is make a small model and if they don’t like it, I sell it as a small piece in the gallery. That way I don’t feel like I have wasted my time.” Pat told me. 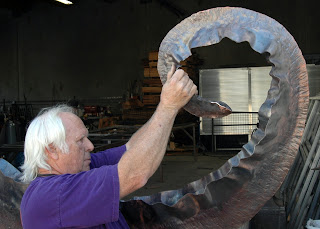 If you visit UTC you might find Pat enjoying the sunshine with his dog near the sculpture. He enjoys watching people interact with it, taking photos with it and speculating on what it might “be”. “I was there one day and heard two women talking about it. One said she thought it was a dragon’s tail and the other said she thought it was a wave.” Pat said. “That’s why Westfield decided to leave it untitled, that way everyone can enjoy their own interpretation of what it represents.”

Meeting and chatting with Pat Downing was a highlight of my month. His work is fascinating and beautiful and he is an interesting and thoughtful conversationalist. Clairemont is lucky to call him one of ours!

If you’d like to learn more about Pat Downing, his artwork or the classes he teaches, visit www.PatDowning.com . The CC News would like to especially thank Beth Downing, Pat’s daughter for her assistance in preparing this story.