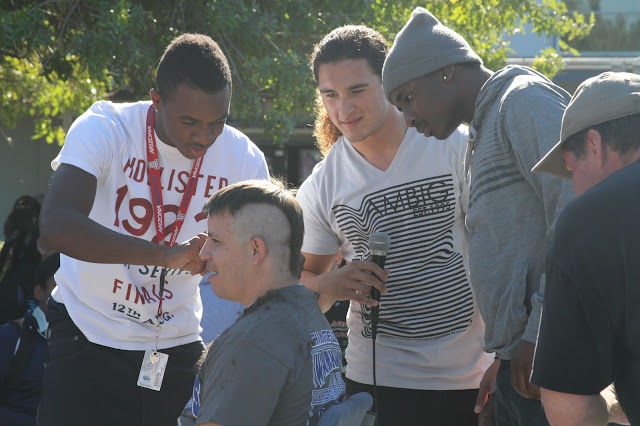 Madison High School's Principal Nash celebrated Warhawk pride this week and kept his promise to Madison’s Football team by getting his hair styled into a Mohawk. At the start of the football season, Nash told the team that he would shave his head if they won the State Football Championship. Pierre Cormier collected on the promise by styling Nash’s hair into a Mohawk (Pierre’s preferred hairstyle) during a lunch-time rally on Tuesday, January 8, to celebrate the team’s success.

Madison made history last month by capturing the State Bowl Division III football championship title over Kentfield Marin Catholic (38-35) on Saturday, December 15, in Carson. The team leaves their mark on the school's 50-year history by distinguishing themselves as champions. This is the second time in three years that the team has played in the State Bowl, and the first time in the school's history, and that of the district’s, to capture the state title.

"The Warhawks worked hard to become state champions. They worked together as a team, endured endless hours of practice, and sacrificed time with family and friends to achieve this success. This Mohawk represents my commitment to the team and is a public acknowledgement of what they have accomplished,” said Nash.

Photo by Ron Runyan
Email ThisBlogThis!Share to TwitterShare to FacebookShare to Pinterest