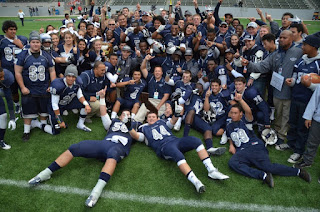 Our Own Madison Warhawks Bring Home a Well-Deserved Victory!

They had been here before. Just two years prior, the Warhawks football team had taken the field at the Home Depot Center in Carson, CA, to play for the California CIF Division III football championship. Madison lost that game to Escalon High during a heavy rain.
This year’s Warhawks team was determined not to allow the weather or their opponent to get in the way of taking home the prized title this second time around. As Madison running back Pierre Cormier put it, “Playing for the state championship is a once in a lifetime opportunity for most players. For some of us to get a second chance at it was really special and we weren’t going to let that opportunity pass us by again.”

After defeating No. 1 seed St Augustine for the San Diego CIF Section title, Madison had to travel to Monrovia, CA the next week to play what was essentially a home game for Monrovia High in the CIF state regional game. The Warhawk’s defense and special teams came up big throughout the game providing key stops, turnovers and runbacks to lead Madison to a 21-17 victory.

Shortly after kickoff in Carson on the 15th, the Marin Catholic Wildcats looked to be more than the Warhawks could handle. As the first quarter drew to a close, Madison found itself down 14-0. One more Marin Catholic touchdown pass later and it looked like history was going to repeat itself for the Warhawks.

But then a funny thing happened. On Madison’s next possession, while in the shotgun formation, an early snap flew past quarterback Kareem Coles’ head as he was looking the other way. The play looked to be a disaster as the defenders raced to get what seemed to be a sure sack. But with great speed, Coles scooped up the ball and raced towards the sideline, buying his receivers time to get open. It proved to be just enough time for receiver Lee Walker to get behind the defense and catch a 47 yard touchdown pass.

While the touchdown only brought the Warhawks to within 14 points of their opponent, it ignited the team’s resolve and fired up their defense. The Warhawk defense held Marin Catholic scoreless for the remainder of the first half. A Michael Garner TD reception and a 41 yard Anthony Herrera field goal resulted in a 21-17 halftime score.

The Warhawk’s dominant play continued in the second half. They took the lead with two Pierre Cormier TD runs. Their defense held Marin Catholic scoreless in the 3 rd quarter. As the 4 th quarter started, down 31-21, Marin Catholic got hot and scored touchdowns on two consecutive drives. This gave them a 4 point lead with about 7 minutes to play. 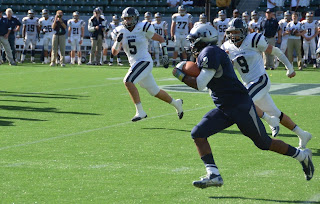 With the momentum shifting to Marin Catholic, Madison needed a way to keep from going 0-2 in the state bowl. Pierre Cormier knew the way. On a 3 rd down play from their own 24 yard line, Cormier took the handoff and ran through the line and past the Marin defense. When he stopped running, Cormier had put Madison ahead by 3 with a 76 yard TD run. That was all the defense needed. Marin Catholic threw an interception on their next drive. From there, Madison ran out the clock.

Madison is the first San Diego Unified high school to win a state bowl title. Congratulations to coach Rick Jackson and the entire Madison coaching staff on a great season. Let’s hope it will be remembered as the first of many championship seasons for the Warhawks!
Email ThisBlogThis!Share to TwitterShare to FacebookShare to Pinterest