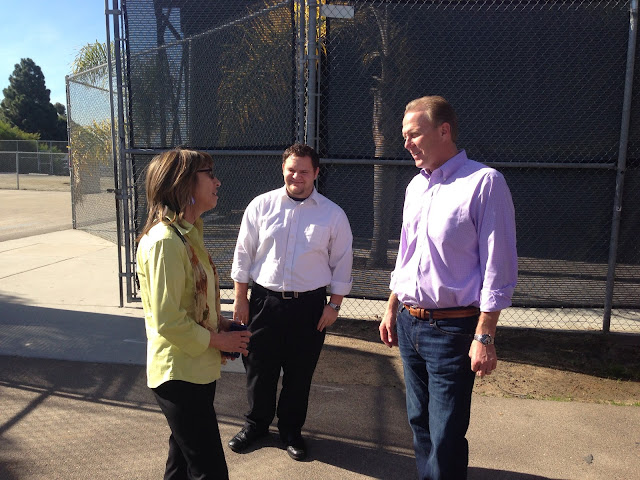 CC News readers know that the western side of Clairemont and the Morena District recently became part of City Council District 2, represented by +Kevin Faulconer. In order to get a grass-roots view of the challenges and opportunities in the area from leaders in the community, Councilmember Faulconer invited Nevin Kleege, President of the Morena Business Association and +Ryan Trabuco , President of the Clairemont Town Council to ride along with him as he toured the area. Lucky me, I got to tag along.


From the derelict Bay View Plaza to a hoped-for trolley stop at Avati and Morena, the 3 hour tour took in a great deal of territory and an even broader range of ideas. Councilmember Faulconer asked insightful questions as he drove, provoking a really interesting discussion. In addition, he made sure to ask his representative Ian Clampett to jot down things to follow up on. I was impressed with his genuine interest in what he could accomplish to help Clairemont and the Morena District in the next two years.

While Nevin’s interest was focused on ways to support the burgeoning restaurant/nightlife area along Morena Blvd., Ryan shared his dream of a beautiful gateway entrance to Clairemont at the foot of Clairemont Dr. As for me, I endangered Mr. Faulconer’s car by having him drive down Dakota Ave. to give him the Clairemont pothole experience (my neighbor Carl has been asking when I was going to get something done about the potholes on our street, hope he is happy about this).

We stopped at the Skate Park on Clairemont Dr. where the guys all reminisced about their skating days, and chatted with the manager. Mr. Faulconer pulled into in the Keil’s parking lot, where we talked about redeveloping shopping centers—a hot topic recently in our community—and exchanged the names of our favorite Clairemont hotspots. Then we checked out the Tecolote Golf Course (I’d never turned in there myself, it’s beautiful!). We wound up the tour admiring the view from the parking lot at the School of the Madelaine and talking .

Although I had met him before briefly, this was my first opportunity to spend any time with Councilmember Faulconer. I found him to be down to earth, sincerely interested in his constituents and open minded. Since I live in his district that makes me happy.

Thank you Councilmember Faulconer for inviting me along!
Email ThisBlogThis!Share to TwitterShare to FacebookShare to Pinterest