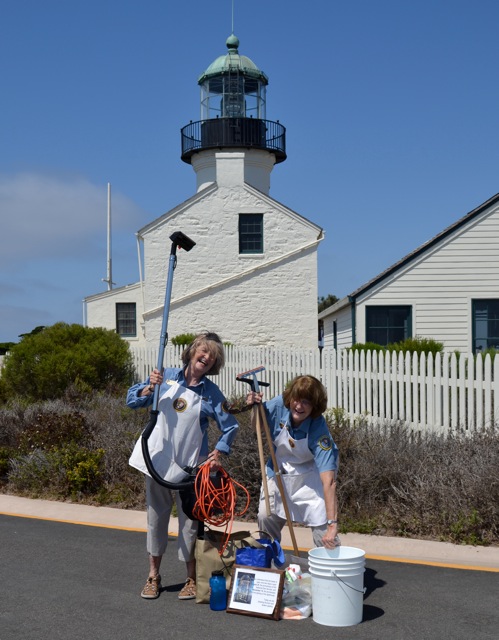 Most CCNews readers have seen the lighthouse at the end of Point Loma, and some may have even visited the National Monument but few have ever been up inside the lighthouse tower. In order to protect the structure, the tower is open only two days a year: August 25 (the National Park Service birthday), and November 15 (the lighthouse anniversary).

Those restrictions don’t apply to Clairemont resident Karen Scanlon and her twin sister, Kim Fahlen of Tierrasanta; they climb the stairs up into the lighthouse whenever they want. That’s because they tend the four lighthouse lenses and lantern of the old lighthouse at Cabrillo National Monument. For more than 150 years, these light-intensifying wonders of glass and bronze, collectively known as Fresnel lenses, warned mariners away from the peninsula of Point Loma and the spit of land called Ballast Point. Light keepers lived on site and kept lamps burning and stations tidy.

Kim and Karen are VIPs, or Volunteers-in-Park, at Cabrillo National Monument. Every two months or so, they climb the spiral staircase of Old Point Loma Lighthouse to the upper landing, and ascend the ladder through the opening in the floor of the lantern. This while toting a weighty bucket of water, aluminum ladder, portable vacuum cleaner, bag of linen cloths, white gloves and aprons, spray bottles, park radio, and two long poles for window washing.

The sisters follow a routine: Kim goes to the outside gallery and begins to wash the windows, sometimes against winds that catch her breath. Karen stays inside and kneels to vacuum the floor and scour two sets of eight ‘gutters’, then wipes the iron pedestal that holds the lens. Kim comes in to wash the interior windows. Together they scrub the walls of the lantern and wipe exterior gallery railings.

Finally, comes the icing on the cleaning ‘cake’! Karen wedges herself inside the lens, stands with little wiggle room, and begins cleaning the glass. When sunlight hits the lens, the prisms magnify the heat. “It can get mighty warm in there!” Karen reports.

Kim angles the ladder at an outer section of glass and climbs high where the spiders web. The lens and assembly stand about ten feet in height. She begins dusting the upper prisms. Around, around and descending, the twins shall meet, rubbing glass with their grandmother’s old linen calendar towels. They finish the job in five hours. 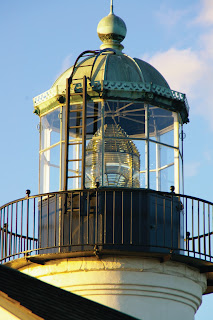 When not polishing lenses, Karen is an early childhood educator and writer, and an award-winning author of maritime history. The twins co-authored the Images of America series book Lighthouses of San Diego . Kim travels the United States and Europe to experience lighthouses and their optics. Her photographs and articles appear in numerous publications, highlighted by her shot of Scotland’s Bell Rock Lighthouse (selected for the promotion of its 200 th anniversary in 2011). A teammate of Lighthouse Lamp Shop, experts in lighthouse restoration, Kim assists with documentation and rehabilitation of lighthouse lenses.

As children, the twins’ family camped near the foot of Cape Hatteras Light on the Outer Banks of North Carolina. “The lighthouse bug bit me way back then,” Kim remembers. (“The mosquitoes bit me,” Karen muses.)

Next time you see the lighthouse, whether it’s a quick look from the freeway or you decide to visit (see sidebar for info on this year’s centennial celebrations) you can thank one of your Clairemont neighbors and her sister for the shiny clean windows reflecting our San Diego sunshine!
Email ThisBlogThis!Share to TwitterShare to FacebookShare to Pinterest