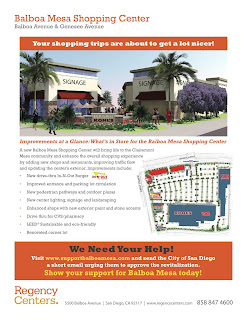 
The Clairemont Community Planning Group meeting last night had a record attendance! Standing room and out the door. Members of the Regency Developers team handed out "I Support Balboa Mesa," stickers at the front door. All but two of the Group Members started the meeting at 6:40pm, one member walked in casually at 7:40pm, making it a quorum for the opportunity to vote!

Kudos to the Planning Group, especially Chair Brooke Peterson, who kept control over the crowd throughout the meeting. She did not tolerate any outbursts, booing and cheering.

The Pacific Bluffs representatives who oppose the plan were given in total 15 minutes to speak as to why they are against the Balboa Mesa Project. In short it is my understanding their main concern is the zoning change the developer is requesting in order to put an In & Out drive thru restaurant on the west side of the shopping center, in between the drives off of north bound Genesee. This section of the center is not currently zoned for a drive thru business.  Although no hard liquor sales or adult entertainment establishments are projected for this particular project, the zoning change would allow these types of businesses. It was my overall understanding that if the developer would move the In & Out somewhere else within the shopping center out of the zone currently tagged Commercial Neighborhood, there would be no need for a zoning change and as a result the condo association, Pacific Bluffs, would be fine with the project.

Then came time for John Ziebarth from Ziebarth & Associates, the architect for this project, to speak. He answered all the concerns and questions that were posed at the November Planning Group Meeting. These concerns dealt with, noise, zoning, lighting and more. John explained the changes made to the plan to answer those concerns in depth with exact measurements and location. Although no additional potential retailers were shared, outside of  In & Out, there will be 16 additional retailers to include a 4,000 square foot eatery with outdoor seating. Pedestrians will have convenient walkways to and from all retail establishments within the shopping center.

Once Mr. Ziebarth concluded, the floor was open for response and questions. More than 20 people responded and posed questions for Mr. Ziebarth: a local realtor posed her concern regarding devaluing of the Pacific Bluffs properties along Genesee Ave;  many Bluffs residents spoke of their concerns; then there were the supporters. Clairemont residents from as far back as the 50's spoke in support of this development project. Former and present Town Council members, Kiwanis Club members and PTA members stated their support.

In conclusion, the Clairemont Community Planning Group voted in favor, with only 2 opposed, to SUPPORT the re-zoning request made by Regency Developers & Ziebarth and Associates.

Next steps for the Developer and Architect are to present their package to the San Diego City Planning Commission in March, after which it will be passed to the City Council for a vote.