Before the championship match, the teams had defeated each other once in division play, making them 1-1. This final game decided the league champion.


“I’m excited that both of our teams have beaten each other once already,” said Honey Badger’s co-captain Lole Veiman at the pre-game practice, “This final game will settle the score”. 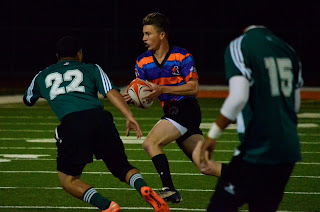 Despite the loss, the atmosphere at the Honey Badger’s post game social was celebratory. At the party, Coach of the Honey Badgers Adam Bloomberg said, “It was a well-played match for both teams. This game is proof that the spirit of rugby is alive and working in Southern California.”


Both Bloomberg and Co-Coach Pueata (P.A.) Auva’a were wary of the strong tackling skills of the Timberwolves players at the practice prior to the championship. “The players from Mission Vista are really big,” said Auva’a , “but, I want our team’s speed and fundamentals to help us come out on top.” 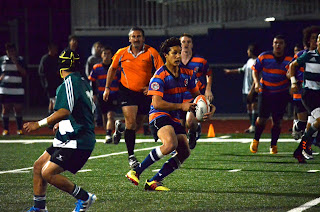 Although the Timberwolves back-line was well trained, the Honey Badgers were not out tried as much as they were out kicked.

The first penalty was called against the Honey Badgers in the first half, and the Timberwolves' fullback Fernando Elizarrez completed three point place kick thirty yards away from the try line. Later in the game he made a tricky conversion that was the result of a try scored in the far right corner of the try zone.

Elizarrez is new to rugby this year, but has a background as a kicker for the Mission Vista football team.

“When I learned that I could still kick in rugby while also getting action on the field as a fullback, I volunteered for the team right away,” said Elizarrez, “transferring my skills as a football kicker to a rugby kicker has been a fun challenge for me.”

Towards the end of the game, the Honey Badgers scored their final try, but with too little time on the clock to make a full recovery, the Honey Badgers take second place, and the Timberwolves become the Southern California Division III champions.

Congratulations to the Honey Badgers for a great season and awesome effort!
Email ThisBlogThis!Share to TwitterShare to FacebookShare to Pinterest