As reported here recently, work will begin next week on the renovation of the Balboa Mesa shopping Center at Balboa and Genesee.  Although the issue of re-zoning a portion of the property to allow for an In & Out drive through is still up in the air, other changes to the existing center will begin this month. 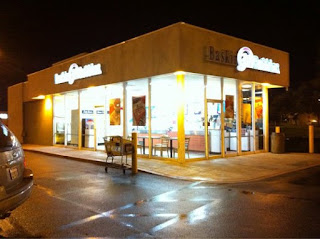 Among the changes planned is construction of a new building next to the Baskin Robbins store, which was built at the same time as the rest of the center in 1969 or '70.  The store has been owned for 16 years by Sharan Kooner, and in that time she has employed many Clairemont teenagers, often as their first job.

Although Ms. Kooner, a single mom, agrees that the center needs an update, the construction of a building just 12 feet from her front door and blocking the view of her store from Balboa isn't the update she was hoping for.  And with the project starting this month, at the beginning of her busy season, she fears she will lose business because of the construction activity and blocked parking around her store.

What's even more frustrating is that Kooner has had to fight to even find out what is planned and approved for the renovation.  "My attorney requested the plans so we could see what was happening, but all the developer sent was a drawing of the proposed finished remodel. I had to go downtown to the Building Department and ask if I could see what had been approved to see the actual site plan," said Kooner today.

Kooner told me that there had been a renovation plan drawn up and approved in 2007 and that she and the previous developer had verbally agreed on a relocation for her store. The 2007 plan called for the demolition of the Baskin Robbins building and construction of a new building approximately double the size.

As far as she can tell at this point, that part of the plan has changed and instead a second smaller building is to be built in front of her store, between her front door and Balboa.  What she doesn't know is how that plan was able to be modified (was a modification approved?) and to a plan that impacts her business so directly with very little information or notice provided to her.

With construction scheduled to begin Monday, Ms. Kooner and her attorney met with the developer again today. This time she has been promised a copy of the site plan and a few of the parking spots near her store that were to be blocked will be released, although her employees will still have to park some distance away.

"This is the time of year we are the busiest and I just hope my customers won't be deterred by the difficulty getting in and out of here during the construction," Ms. Kooner said.