Today, the City of San Diego’s Audit Committee, chaired by Councilmember Kevin Faulconer, unanimously approved a plan to improve how City crews repair potholes. A “proactive pothole repair” model, as suggested in an audit of the City’s pothole tracking and repair system, would allow the City to fill more potholes in less time. The audit was conducted at Faulconer’s request. 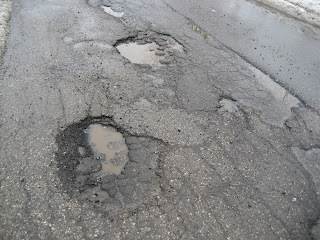 “Simply put, this audit shows substantial improvements can be made to the City’s pothole tracking and repair system,” said Councilmember Kevin Faulconer. “The City can repair potholes faster and more efficiently if these recommendations are implemented. I’m calling for action on this audit so the City can fix more San Diego roads.”

The audit finds that the City can increase efficiencies by filling potholes neighborhood-by-neighborhood rather than only responding to constituent complaints.
“Too often City crews would repair one pothole but skip several others nearby. The current system is inefficient and frustrating to citizens. A simple change to allow City crews to proactively repair potholes as they see them will change that,” said Faulconer.

For example, a case study showed that by using a proactive neighborhood-based repair model, the City could have filled the same number of potholes, reduced the total miles driven from 317 to 100, and decreased the number of days to repair those potholes from 16 to 9 days.

"Communities south of the I-8 freeway deserve City services equal to their neighbors to the north," said Faulconer.

The recommendations will allow the City to determine the efficiencies of the pothole repair program by tracking the cost to repair a pothole – which is now estimated to be $32.50, based upon a $1.3 million budget and 40,000 potholes repaired.

Addressing the condition of City streets should be the City’s top budgeting priority, according to a 2010 survey of San Diego residents.

The Audit Committee voted to send the audit recommendations to the City Council, which is expected to vote on the report in the coming weeks. The audit report states City management agrees to implement all the recommendations.
Email ThisBlogThis!Share to TwitterShare to FacebookShare to Pinterest