Balboa Mesa: In-N-Out or Nothing?

Balboa Mesa: In-N-Out or Nothing?
By Nikki Bradford

New signage has gone up and construction work has finally begun at the Balboa Mesa Shopping Center located at the corner of Balboa and Genesee Avenues. However, a recently proposed and hotly debated change of zoning for a portion of the property has not been approved. The owners, Regency Centers, have put their request for a rezoning on hold and are now submitting a second request for a deviation, or 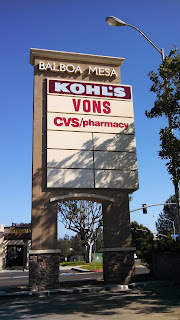 exception, to the established zone restrictions to allow for construction of an In-N-Out.

To get a little perspective, realize that Balboa Mesa Shopping Center was created during the early growth of Clairemont in the 1960′s. It was designed to incorporate two zones: the Community Commercial ‘or “CC” zone and the Commercial Neighborhood or “CN” zone. The difference between the two has to do with what type of businesses may operate within each one. Both zones allow a large range of commercial development but the CN zone is more restrictive because it is closer to homes. In a CN zone, there are no drive thru restaurants, no hard liquor sales, no late night operation and no live entertainment—the kinds of businesses not usually compatible with residential living.

The western edge of the shopping center for first 150 feet south of Balboa along Genesee is the part of the center that is zoned CN, as it has been since the shopping center was first built across the street from homes.
Michael Puente lives in a home across the street from the shopping center. "There is a real misconception out there that in order for redevelopment to occur at Balboa Mesa, the zoning must change,” he said recently. Puente and other homeowners in the area who object to the zoning change suspect the misconception exists because “the redevelopment plan was approved back in 2007 and then nothing happened. The fact is development stopped everywhere when the economy tanked, and that’s why this corner has sat idle for so long,” said Puente. “Four new buildings, including the one they are proposing turning into a drive-thru, have
already been approved and they are starting construction. So keeping our protections in place isn’t stopping redevelopment. It will simply make sure the buildings fit the current zoning.”

The approved plan adds approximately 16,000 square feet of new retail space along Balboa and Genesee Avenues. Opponents say they aren’t against In-N-Out or other drive thru restaurants, and they certainly aren’t against redevelopment of Balboa Mesa; their goal is simply to keep the near edge of the center compatible with its neighbors.

Nikki Bradford lives in Clairemont with her husband and two kids. When not exploring the city, she likes to garden, read, and avoid cooking.
Email ThisBlogThis!Share to TwitterShare to FacebookShare to Pinterest