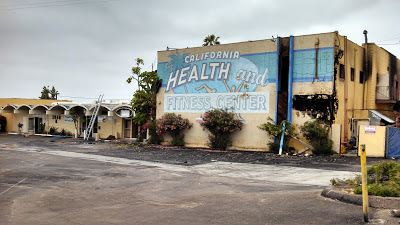 As most of Clairemont knows, the fitness center building on Clairemont Drive across from Keils burned in a three-alarm fire last night. The building, which many older Clairemont residents know as the former home of the Jack LaLanne Fitness Club, was in the process of being remodeled. A source at the scene said the damage to the 50's-era building is so severe, there is a possibility that it will need to be demolished. 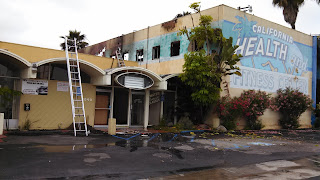 Firefighters remained on the scene this morning because the inside was deemed a collapse hazard; consequently no one could go inside to verify the fire was completely out.  Other businesses next to the gym have been impacted as well. Mission Bay Nite and Day Traffic School is without power or water at this time, leaving Steve DeBry with a list of students to notify that class today is canceled. Coincidently, DeBry's former location above nearby Champ's was damaged in a fire as well when the bar burned a few years ago.