Everyone knows honey comes from bees, but not everyone knows how they do it. Hilary Kearney, owner of Girl Next Door Honey is one who knows. Hilary, who grew up in Clairemont and whose folks both still live here, was kind enough to help me learn a multitude of cool things about bees and honey one day recently. She was taking care of one of the “hosted hives” she has placed around the county and invited me to don a bee suit and come along and watch. 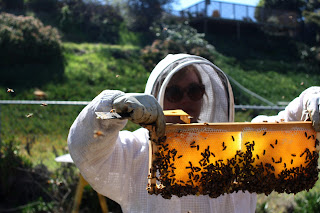 On this day the hive was in the side yard of Hilary’s mom’s home in Clairemont. Hilary showed me the smoker she would use. “Most people think that smoke makes bees calm, but actually it makes them think their hive is on fire. When they smell the smoke they start to gorge on honey, they store it inside themselves so that if they have to abandon the hive because of the fire, they can take all that honey with them. When you use the smoker they get so distracted trying to eat their honey, they forget all about you.” she said. She uses it sparingly and even without the smoke the bees seem unperturbed by our presence or Hilary’s handling of the hive.

“Another common misconception people have is that the ‘Africanized’ bees are some other species of bee and that they need to be exterminated. They are actually the same species as the nice, European bees they are just more defensive of their hives and that can make them aggressive. A bee’s temperament is controlled by its genetics and the queen bee lays all the eggs in the hive so a beekeeper can introduce a nice, European queen to an aggressive hive change the whole hive to be nice. Most of the time bee swarms can be saved and made to be nice.” Hilary said. She performs swarm rescues and relocations, so folks who find one don’t have to have them killed.
The hive appeared to be a stack of three wooden boxes, each roughly two foot high and about two foot square. A wooden lid covered the top and bees flew around her as Hilary pried the lid off. Inside I could see what looked like empty wooden picture frames hanging side by side like a file cabinet. Bees were everywhere, even in big clumps clinging to the frames but I felt safe in my bee suit and the bees were not at all bothered by Hilary pulling the frames up and out of the hive.

“Bees eat honey,” Hilary said, “and honey is basically dehydrated nectar. “ She showed me the wax comb the bees build and the cells filled with honey. “The bees flap their wings really fast over the honey to dry it out, and even hold it out on their tongues to help dry it. When it’s ready they seal over the cell with wax,” she said, and showed me what that looked like. 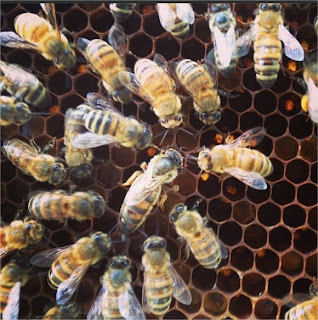 Hilary describes herself as an artist turned beekeeper. She began learning about bees and beekeeping while in school at UC Santa Cruz. With her degree in Fine Art in hand she came back to San Diego and moved in with her dad in Clairemont. She’d been reading and watching videos about beekeeping and when she suggested a beehive in the big canyon-side yard, her dad readily agreed.

Hilary put a “Got bee trouble? I can help!” ad on Craigslist and when the call came that there was a swarm to be removed she was ready. “I didn’t have a bee suit or anything I just had layers of clothes on and my dad, who insisted on coming, did too. We looked nutty but we got the swarm!” she said with a laugh.

Hilary started teaching beekeeping classes out of her living room in Clairemont and discovered there was a lot of interest. “I also discovered that many people know next to nothing about bees - which is surprising considering how important they are for our food production! That's when I decided I wanted to start a different kind of honey business; one that strives to include the community in the process of how honey is made. I try to include people on any level they are comfortable with. I perform and organize humane hive removals, teach interested beginners how to beekeep through classes and workshops, place and maintain hives in people's backyards and of course, I sell honey!” she said.

These days Hilary manages about 20 hives located in backyards from Imperial Beach to Lemon Grove and of course in Clairemont. Hilary says all the honey is just a little different, depending on where the hive is. She feels the Clairemont honey is the best, and not just because the “Girl Next Door” grew up here. “I think there are more people gardening in Clairemont and there is a greater variety of plants because of that and all the canyons. The climate on the mesa suits so many things the bees like.” she said.


Hilary hopes to expand the number of hives both in Clairemont and around the county. To that end she teaches beekeeping classes at the San Diego Sustainable Living Institute and offers her services consulting with individuals who want to have their own hives. “The people who host my hives know that bees have a benefit beyond just the honey they make. Their fruit trees, vegetable gardens and even ornamental plants all do better because of the bees. They have told me that the bees’ pollination increases not only the quantity of fruit and flowers but the quality.” Hilary told me.

Meanwhile, in my bee suit I watched bees join together to form a tiny little chain that was strong enough to hold a ball of bees in a frame as Hilary lifted it. I got to see female bees waving their wings so fast they were blurred in order to propel a scent message to other bees. I learned bees tend to not like dark haired people, since most of their predators are dark (bears, raccoons, skunks).

Once the hive was put back together and we were emerging from the bee suits, I asked Hilary what message she would want to share with Clairemont in particular. “I’d really like to see more hives in Clairemont, whether hosted for Girl Next Door Honey or even better, people having their own hives. Bees are so important to our ecosystem, and this area is just great for them,” she said. Indeed, according to the U.S. Department of Agriculture, bees pollinate 80% of the US’s flowering crops which constitute 1/3 of everything we eat. And it’s not just human food bees help to produce; alfalfa is a major food source for the beef and dairy industries, and bees pollinate that as well.

As I learned from my experience with Girl Next Door Honey, having a beehive on your property can be a way to improve the yield in your garden without a mess, smell or marauding bees chasing anyone around the yard. If you are interested in finding out more or want to get started learning to keep bees, visit GirlNextDoorHoney.com for information on classes, hosting a hive and much more.
Email ThisBlogThis!Share to TwitterShare to FacebookShare to Pinterest