Rusty Trimble feels fortunate to have been born and raised in the Clairemont area. Outside of a five year span in the 90s when he worked in Arizona, Rusty has spent his whole life living in this part of San Diego, attending Whittier Elementary, Marston Middle School, and graduating from Clairemont High. 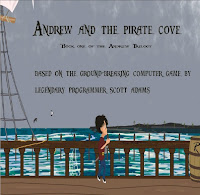 Rusty always enjoyed both reading and writing, but the latter had always been an elusive desire. That all changed with the birth of his first son Andrew. Before his birth, Rusty knew little about Autism so his son’s diagnosis with the disorder in 2008 was startling and at the time, heartbreaking. These days Rusty feels blessed that Andrew sees and approaches the world so differently. It is really a great part of his unique character which has endeared him to almost everyone who has met him and experienced his friendly personality.


Rusty decided to begin writing when during bath times Andrew asked him to use his toys to create stories. It became a daily routine which led to his first book Andrew’s Great Train Adventure in 2009. Over the last four years Rusty has self-published a total of eight illustrated books and three novels for children, all starring Andrew and a few of them featuring his second child, Tyler. His latest book, Andrew and the Pirate Cove, was released in May 2013 and is based on an old computer game written by Scott Adams , considered the father of computer gaming.

Rusty’s main motivation for writing has always been for his son’s enjoyment, but he’s also pledged to donate 50% of any profits to causes which research and seek treatment for Autism and Autism Spectrum Disorders. Most of his books are available as eBooks on Amazon and as paperbacks under the name Rusty Trimble at Lulu.com.  Andrew and the Pirate Cove is on both sites, but will soon be available on Barnes and Noble and the iTunes bookstore through Smashwords.com. 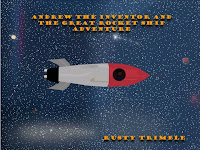 Rusty Trimble is currently working on a sequel called Return to Pirate Cove as well as a noir novel called Tammany Hall which is about a true crime writer hired to write the biography of a dying Mafia don. If you are interested in this Clairemont writer’s books and would like to help raise money for Autism research, visit Rusty Trimble’s author’s page at Lulu.com , Amazon.com, or Smashwords.com.