San Diego's "Spotless Comedy" would like to invite you and your guests ages 18 and up to a night of clean comedy on Thursday August 29th at 8pm at the Comedy Palace (8878 Clairemont Mesa Blvd). 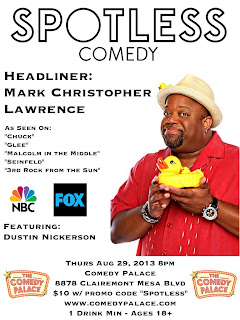 Spotless Comedy is a comedy production team who puts on clean comedy events at various locations in and around San Diego. We take pride in putting on comedy shows where you won't hear vulgar language or crass material.

The event is only $10 when you use the promo code “Spotless” by going to www.comedypalace.com. There is one-item (food or drink) minimum at the club and is for guests ages 18 and up (under 18 with parent or guardian).

Headlining this event will be one of the stars of NBC’s “Chuck,” Mark Christopher Lawrence. Mark is one of Hollywood’s most sought-after character actors. In addition to displaying a variety of theatrical skills, this diverse actor also excels as a producer, vocalist, comedian, entrepreneur and literary scholar.


He was raised in an L.A. neighborhood submerged in incessant crime and corruption. In spite of this, he evaded the violent street life and discovered other ways to entertain himself. With an innate skill for imitating neighborhood companions, coupled with his astonishing ability to adopt mannerisms and develop characters, Mark’s talents led one of his teachers to enroll him in his high school’s debate team. His success resulted in a full scholarship to attend USC while he sharpened his craft working professionally with the critically acclaimed Los Angeles Theater Center. Eventually, Mark acquired his first job in television, a role on Hill Street Blues. Mark continued his award-winning television performances in Reba, Seinfeld, Touched by an Angel, Malcolm in the Middle and others, until he was offered his first film role in Terminator II: Judgment Day. Thereafter, this constant entertainer continued to depict a variety of comedic and dramatic characters in feature films: The Pursuit of Happyness, Crimson Tide, K-Pax, and Planet of the Apes, among others.

Mark’s memorable charm and genuine love for people permeates his performances and relationships. Mark formerly served as San Diego’s local branch President of the American Federation of Radio and Television Artists as well as Vice-President of San Diego’s local branch of the Screen Actor’s Guild. Mark also supports and contributes to various charities, primarily those that assist children, diabetics and breast cancer patients. Mark heads his own foundation, The PDZ Foundation for the Arts and Education, with prominent board members like baseball great Tony Gwynn.