Endangered Parrots in Clairemont: You Can Help! 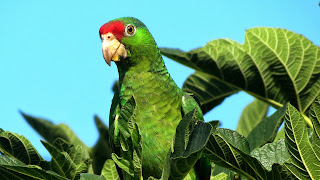 Have you heard the chatter of wild parrots around Clairemont? Once you hear them, look up and you are likely to spot them flying overhead or foraging in trees. These parrots are not just friendly pet birds that have been released; they are wild and native to the tropical areas of Central, South America, and Mexico. These parrots have naturalized in our local neighborhoods and thirteen different species have been observed throughout California! 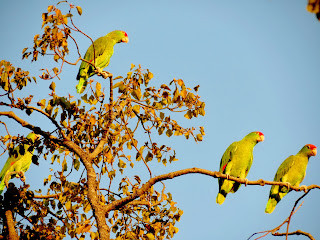 Three of these wild species call Clairemont home and although these colorful birds appear much like domestic pets, they are not tame and unfortunately they are being poached for the pet trade. Two-thirds of the parrot species found in Clairemont are listed as Vulnerable/Endangered, which means the parrots are rapidly decreasing in their native habitats and these species could become extinct. The reason for their status is due to long-term native habitat destruction and species exploitation for the pet industry. Although disturbing, there’s a bright side to this issue; there’s a non-profit that is fully devoted to these wild parrots.

SoCal Parrot is the only local organization that rescues, rehabilitates, and releases injured and orphaned wild parrots found throughout California. This organization’s focus and mission is to “rescue, educate, and protect.” Along with rescue and rehabilitation, SoCal Parrot delivers educational presentations to local civic groups and organizations allowing them to see a parrot ambassador close-up, and learn about how unique these wild parrots truly are. Protecting and ensuring the parrot populations do not diminish completely is the ultimate goal, which is supported by the release of rehabilitated parrots along with SoCal Parrots’ public outreach and education efforts.

You can help! SoCal Parrot now offers memberships and sponsorships. Clairemont residents can become SoCal Parrot members at a special15% discounted rate.  You can also sponsor an ambassador or one of their countless injured parrots.  For more information visit http://www.socalparrot.org/ or email:
info@socalparrot.org Phone 858-522-0852.