My daughter Riley Phelps was born with cerebral palsy and she is now 9 years old.  From a young age we got her in the swimming pool, in her walker, in Miracle League baseball, surfing on her belly, adaptive skiing, on a trike, and generally going fast on things like roller coasters and in her wheelchair going fast. 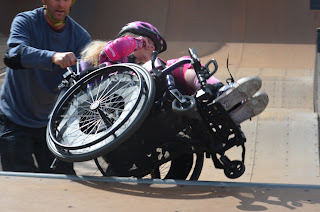 About a year ago, her brother Evan was in a skate camp at the YMCA Krause Family Skate/Bike Park in Clairemont.  After getting him there on weekends Charlie Payne, the skate park coordinator,  asked if I wanted to get Riley involved and riding ramps.  Riley had asked me previously, and I had pushed her up embankments and ramps prior to this time which she loved.  I signed the waiver, put a helmet on her, strapped her in her chair tightly and the rest is history.

She’s been loving skate park ramp riding ever since and has been to a few other skate parks in San Diego, one in Maui, and one in Florida.

A few months ago Charlie asked if I wanted to get Riley into skate camp with her brother Evan.  I had never given it much thought since it’s a lot of work for anyone who doesn’t deal with her regularly but I thought that was a great idea.  I set it up with Mission Valley YMCA and the accessible ramps all over the park are finished. 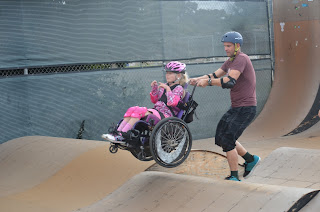 Riley’s favorite thing are top turns off of the coping and just going fast up and down the ramps as pictured here.  Needless to say, Riley is very excited about being at the skate camp alongside her brother and other skaters riding ramps with the help of an aide. Big thanks to Charlie Payne and the YMCA! 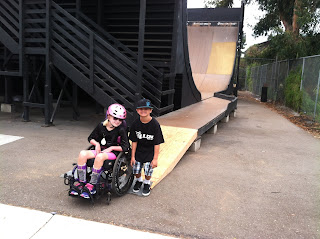