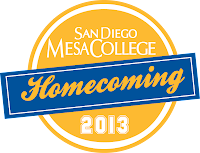 Are you a Mesa grad? Current student or parents of one? Current, former and future students, family, and friends are all invited to show their Olympian spirit at San Diego Mesa College’s second homecoming celebration before a game against Southwestern College on Saturday, Oct. 19, at the Merrill Douglas Stadium.

Homecoming 2013 kicks off at 5:00 p.m. in the East Athletics Plaza next to parking lot #3.  Festivities include a Mesa Memory Booth, trivia games, opportunity drawings, and more. General admission is $8; students $5 or free with valid AS sticker. The Mesa College Olympians will take on Southwestern College at 6:00 p.m.
Ms. Senior San Diego, Jeanne Lenhart, is the 2013 Alumni Honoree
Jeanne Lenhart, Ms. Senior San Diego 20123, of Pacific Beach, is this year’s alumni honoree. The Mesa volleyball player and ’66 grad transferred to SDSU (then San Diego State College) and taught dance at San Diego City Schools. She later returned to Mesa to take interior design classes, obtaining an Interior Design certificate in 1993. Now semi-retired, Lenhart still plays volleyball three times a week in South Mission Beach and in the US Open Nationals. Her dance routine helped her to win the Ms. Senior San Diego crown. Lenhart will participate in the traditional pre-game coin toss and address the crowd during half-time, when members of the current Mesa Women’s Volleyball team will do the popular tee shirt toss.

Alumni and neighbors are also invited to tour of the campus at 6:00 p.m., Thursday, Oct.17. The college is  being transformed through a voter-approved $450 million dollar capital bond improvement plan. Interested persons can sign up for the tours by calling 619-388-2285.