Clairemont Act One Presents: "Clued In" This Weekend! 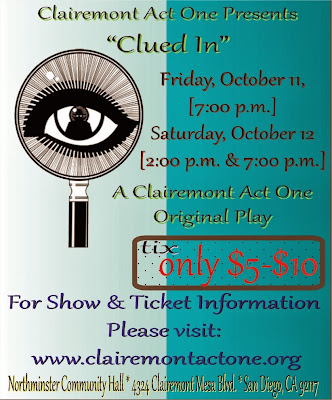 This show will be in Clairemont for TWO DAYS ONLY, October 11th at 7 p.m. and October 12th at 2 and 7 p.m. This performance is appropriate for children over 12. Buy tickets online here: click here or call 619-786-PLAY.

It's a dark and stormy night, and eccentric millionaire Cole Daid Boddie has invited friends from all over the globe to a mysterious weekend at his manor house.  Tempers and suspicions run high after Boddie is discovered murdered and the police force his guests to remain at the house while the investigation is underway.  Locked in with nothing to eat but coconut milk and Wheetabix, the strangers are all asking the same question--WHODUNNIT?
Email ThisBlogThis!Share to TwitterShare to FacebookShare to Pinterest