Clairemont In-N-Out is Out! 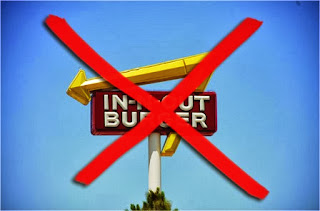 By Janet Miller
Fans of In-N-Out were disappointed to learn that the popular drive through that was proposed to go into the revamped Balboa Mesa shopping center will not be opening there after all.  The idea was controversial from the start. Although most of that shopping center on the southeast corner of Balboa and Genesee is zoned Community Commercial or “CC”, a strip of the property along Genesee is zoned Commercial Neighborhood or “CN”. The difference between the two is that the CN zone is meant for areas near homes, and so is more restrictive. This zoning prohibits hard alcohol sales, drive through restaurants, live entertainment and late night operation.

Unfortunately, this section of the center is exactly where the In-N-Out was to go.  In order to get a permit to build it, the developer would have to pursue a zoning change.  It was that zoning change that opponents of the In-N-Out were against.

Their argument was that since the homes across Genesee were built before the shopping center the CN zoning was deliberately assigned to that section because of the proximity to the residences.  Changing that zoning would mean that any kind of business could be located right across the street, even a bar with live music open until 2am.


For several months negotiations went on, and finally our ex-mayor, Bob Filner, got involved. Some of the residents of the homes across the street went down to one of the mayor’s Saturday “Meet with the Mayor” sessions and told him of their concerns.  He responded by telling City staff to “kill” the project.
Regency Center, the developer, worked closely with the Mayor’s office and went back to the drawing board to come up with adjustments to the plan in hopes of making the project work to everyone’s satisfaction.  They added things like a lowered drive through lane and noise dampening walls in an attempt to ameliorate the impact on residents nearby.

With the changes, the Clairemont Planning Group voted to support the project.  The next step would be to gain support of the City’s Planning Commission for the zoning change and then the full City Council’s.  It looked like the project was moving forward and that sometime next year Clairemont would be enjoying double doubles at Balboa and Genesee.

Then on September 9th, Regency Centers sent out a letter announcing that the In-N-Out part of the shopping center remodel was not to be:


After significant consideration and debate, Regency Centers will not be proceeding with the In-N-Out Burger at Balboa Mesa. While this decision was a difficult one, it was made in the best interest of the shopping center.
Unfortunately, during his tenure, former Mayor Bob Filner and his administration imposed numerous restrictions on the In-N-Out drive-thru. These restrictions became so severe that ultimately it did not make sense to move forward with this portion of the project. Regency Centers will be moving forward quickly to identify one or more new tenants to replace In-N-Out. We remain committed to finishing the redevelopment of Balboa Mesa Shopping Center and we expect all phases to be completed in late 2014.

Presently Regency is working on the buildings approved for the site back in 2007. Several new businesses have signed leases for space in the new buildings such as Boudin SF Bakery and Pie-Ology pizza.  As to what will happen in the spot reserved for In-N-Out, nothing has been announced as of press time.
While much of Clairemont's attention has been focused on the renovation of the Balboa Mesa shopping center at Balboa and Genesee, it isn't the only center being renovated at that busy intersection; the center on the northeast corner, Genesee Plaza, is in the midst of a renovation as well.  We have already seen Ralphs depart and Home Depot expand, and the Blockbuster store become a Panera Bread restaurant.  Across the parking lot, local favorite Voltero's moved to a new place on Convoy and a Five Guys, Yogurtland and Chipotle are taking their place.

Questions about the future of Party City and the other shops between Target and Home Depot started to pop up on Facebook as a banner proclaiming a closing sale was hung on the front of Fashion Scene.  The rumor mill kicked in with the favorite being that a Whole Foods was coming to that spot.

After speaking with a representative of the center, it turns out that there is no Whole Foods coming to that location. As for Party City, it will be relocated to a new building. While it is under construction, they will occupy a smaller spot near Marshall's. Payless Shoe Source is still working with the property’s management to determine where they might relocate.  Catherine's and Fashion Scene will be leaving the center, and at press time there was no word on where they might reopen.

There will be other changes to Genesee Plaza. The spaces in the section next to Panera up to Taste of China all have leases that are up at the end of the year.  Those tenants will be moving out and the building will be remodeled. A new vegan restaurant, Native Foods, will go into the remodeled area next to Panera sometime next year.

Although the In-N-Out won’t be coming to Clairemont’s busiest intersection, there will be many other new businesses opening and the look of that corner, which for so long has been derelict, will improve immensely.  That’s a win for everyone in the community.

Now, if only we could get a Trader Joe’s…