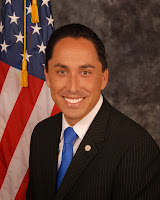 This time last year, I had just been elected Council President for 2013 by my Council colleagues. It was a tremendous honor, and I was looking forward to advancing policies that would strengthen our neighborhoods and our economy. We began the year with a new mayor who accomplished little, disrupted much, and ultimately became a liability for our City. What occurred in those first nine months, well it’s nothing I could ever have imagined.

When I became Interim Mayor on August 30, it was my intention to accomplish as much as I possibly could in a short period of time. This time of year we all make our holiday lists. Here is a list of my Favorite Things we’ve done since I became Interim Mayor.
I know these accomplishments happened because of the cooperative spirit of my Council colleagues, our City leadership team, the City Attorney, City employees, and all San Diegans. Together we helped our City get back on its feet and moving in the right direction again. There is more work to be done between now and March when a new mayor takes office, and I promise you I won’t be slowing down anytime soon.

Finally, I hope you’ll be able to join me at the State of the City Address on January 15 at 6:00 p.m. at the Balboa Theatre to celebrate our progress and envision our future.

The year started out naughty and ended up nice. I wish you all a joyful and safe holiday season. As always, thank you for the opportunity to serve.