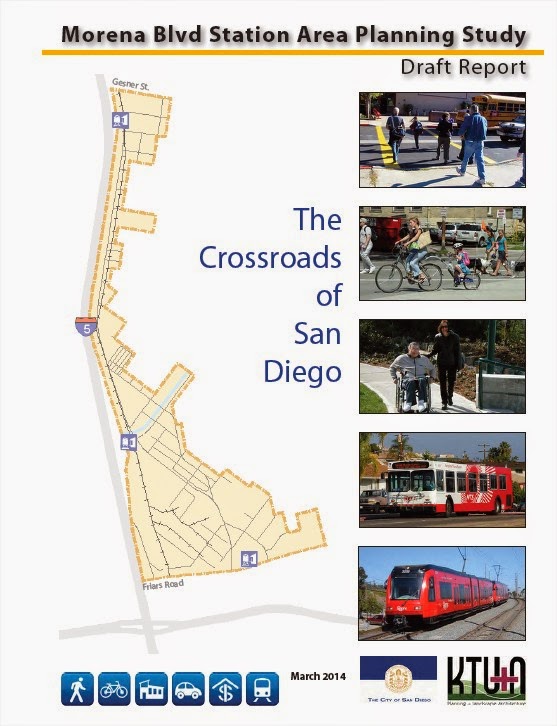 As reported here last week, Councilmember Lorie Zapf, in her role as Chair of the Smart Growth and Land Use committee objected officially to some of the recommendations in the draft study  of the area around the proposed light rail trolley stations that will run from Old Town north along Morena. Proposed stops are at Tecolote, Clairemont Drive and Balboa.

Response from the city's Planning Department head, Bill Fulton, was that the study would be revised. Indeed it has, the revised study was released yesterday with the changes made.

However not everyone is satisfied the danger of unwelcome changes is over. A person identified only as "Maria" sent this to the CC News in regard to the revised study:

You posted an article on April 24th regarding the Morena Blvd study that needs to be updated to reflect yesterday's release of the Morena Blvd. final report. While the language in the final report currently maintains the 30 ft. height limit to pacify public opposition, if you read the fine print of the report the planning department specifically states that maintaining the 30 ft. height limit is only a preliminary analysis open to future revisions. The study goes on to state that in the fall of 2014 phase 2 of the project will begin in which there will need to be an amendment to the Clairemont Mesa Community Plan to rezone parts of Morena Blvd to higher height limits to reflect the study's goal of increasing density.  If you are interested, you can read the actual wording in the study on page ES-35 of the final report on the city's website.

There will be a number of community meetings in the coming weeks that will focus on, or in some cases touch on among other issues, the introduction of a new trolley line and the changes it will bring.  Watch for this topic to continue to generate discussion and community involvement around planning and land use.