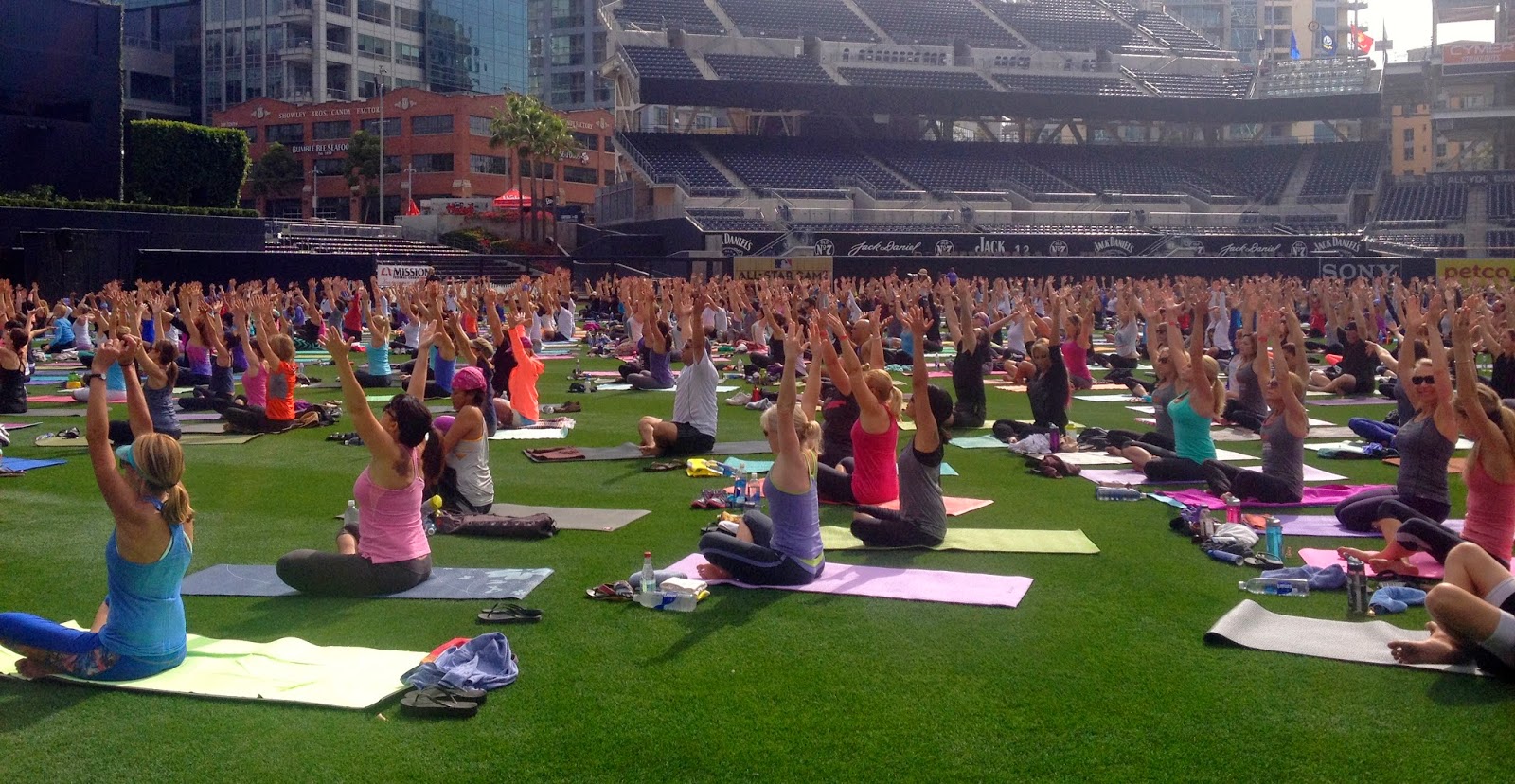 Hundreds of yogis gathered at Petco Park in center field in San Diego for an unforgettable yoga experience with a common cause, to raise money for the City of Hope, National Medical Center. The City of Hope is a leading research center for cancer, diabetes and life-threatening diseases. 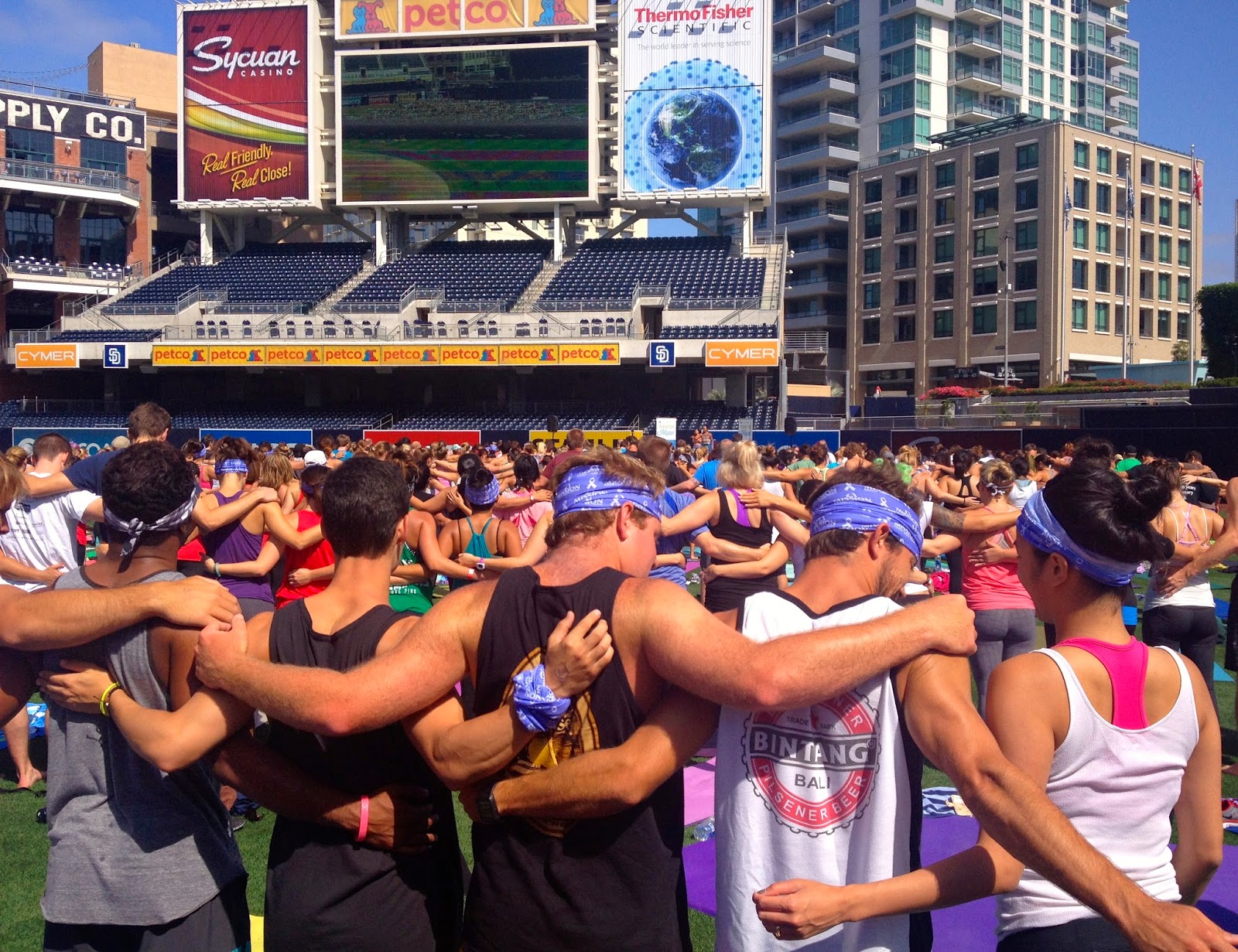 The yoga event, named Yoga for Hope, took place on Saturday, June 7th, 2014 with an estimated eight hundred yoga practitioners in attendance. It was the fourth annual event that has raised over $100,000 bringing thousands of yogis and studios together in order to raise funds for the City of Hope, a private, not-for profit, clinical research center. The event was a combination of donors including sponsors, partners, vendors, and renowned yoga teachers leading the event. The instructors who led the class were Michael Fukumura, Stacy McCarthy, Claire Petretti Marti, and Amy Caldwell. The theme of the vinyasa style yoga class was to access courage and hope for those individuals currently battling cancer and life-threatening
diseases, as well as those who are supporting loved-ones in the process.

Yoga instructor Claire Petretti Marti introduced the event. A breast cancer survivor herself, Claire was diagnosed in 2010. She opened the event with her own struggles with treatments including radiation and chemotherapy. She shared how yoga helped aid in her recovery process during challenging moments. Claire led a touching chime ceremony where all attendees were asked to ring a small bell for a continuous amount of time if they were currently in treatment, celebrating a cancer-free milestone, or if they knew a loved-one or acquaintance that had struggled with the disease. The entire stadium resonated with the sound of ringing bells in honor of those that have had to deal with the effects and treatments of cancer. A moment of silence was honored.

During the yoga class, Michael Fukumura led the students in an “all-class” partner pose. He asked the crowd to put their arms around each other while in the balancing posture, Tree Pose, Vrksasana, and to allow a certain amount of natural swaying to happen in order to rely on their neighbor for support. The process was touching and it brought the class to its peak during the event.

Stacy McCarthy closed the class while Aja Lee, played a ukulele and sang while the class of yogis laid on the centerfield of Petco Park in resting posture, Savasana. After the event, there was a yoga marketplace where attendees gathered to visit vendors selling and promoting yoga related clothing, healthy food and juices. Attendees received a free Padres ticket for the baseball game that day, (Padres vs the Washington National’s). 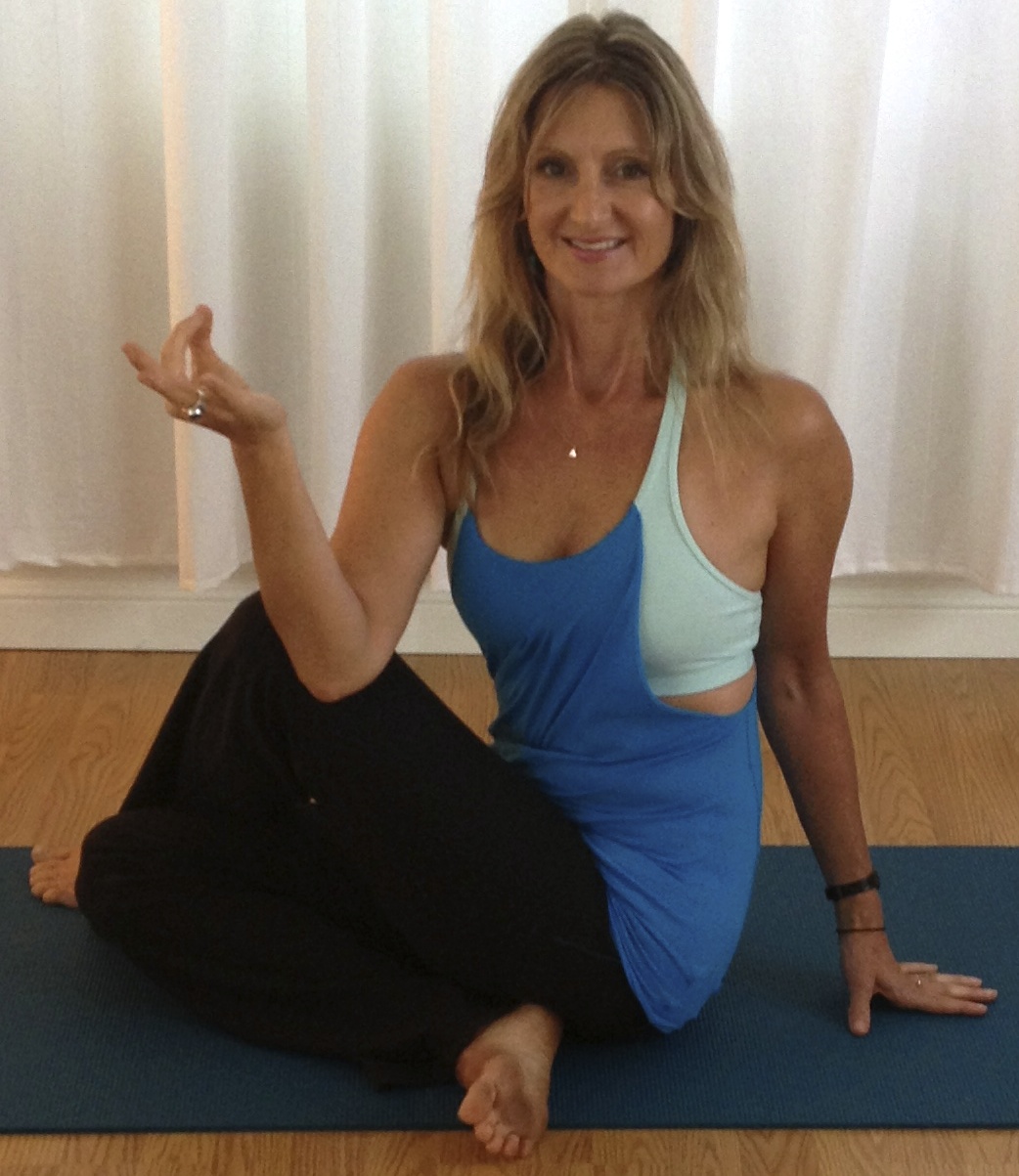 Christi Iacono is a certified yoga teacher, at the 500 hour level, and she is the owner of In Rhythms Yoga, in Clairemont. IRY is a small neighborhood studio in Clairemont, S.D., located in the Mounts streets. Christi has experienced many positive physical and mental transformations from her regular yoga practice. She enjoys sharing her experience, passion, and dedication with her students. She believes that yoga is accessible to all. Rather than forcing someone’s body into a pose, Christi carefully works with each individual to find the variation that will best serve their body. Contact christi@inrhythmsyoga.com for more info.
Email ThisBlogThis!Share to TwitterShare to FacebookShare to Pinterest