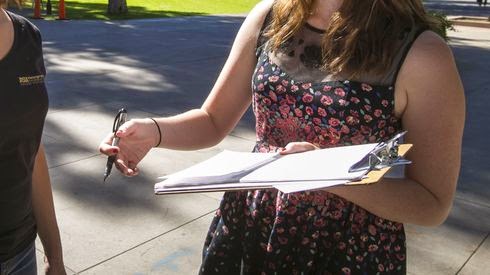 As I learned while serving on the State Assembly elections committee, signature gathering is a huge and mostly unregulated industry. There are some requirements for people to be trained in basic ethics but it is never enforced. Most of these people are unable or unwilling to get other types of employment and move from place to place to work on these campaigns. They are the migrant workers of politics.

Recently I had my 1st interaction with a petition gatherer, at the Sprouts in Clairemont. I had just finished loading groceries in my car. He yelled out "are you a registered voter in the city of San Diego?" and I knew it was time to try my strategy: read the details.

The man I talked to was in his 40's, very tan, looks like someone used to being outdoors. Given much of this work is hanging out in parking lots talking to as many people as possible, you have to be comfortable working outside and hustling to get your message across as quickly as possible.

He started out by asking if I wanted to help raise the minimum-wage. I told him that had already been done by the city Council.

He countered that the mayor had vetoed their action. I replied that they had overridden the veto a few days ago.

Then he told me the purpose of the petition is to keep the Council from "running roughshod" over voters. This is according to man who also admitted he is not from San Diego. He then tried telling me: "businesses will close if this doesn't happen, that's why the Chamber of Commerce supports it."

We continued to talk, and I insisted on reading the petition language. This seemed to make him uncomfortable. The language is many pages long full of a lot of information that I sincerely doubt anyone will take the time to read. The signature pages are attached to each pamphlet, which showed a phased timeline for wage increases, and described who is eligible for sick leave, under what circumstances, what defines "illness," etc.

I kept reading and asking questions, and he kept trying to take the petition away from me as I went through the pages. Then he began to point me to the summary page. I thanked him for directing me to the one page summary, but told him there were a lot of details and that I thought it was important to know before signing.

I also explained we elect people to represent us, not "run rough shod" over voters. At that point I told him I would not be interested in signing, and he called out to some others getting in their cars, and left to pursue them. All this was at the Clairemont Sprouts Store. It looked like he already had many signatures.

Lori Saldaña grew up in Clairemont and still lives here.
She served three terms representing the area
as State Assemblywoman for the 76th District.
Email ThisBlogThis!Share to TwitterShare to FacebookShare to Pinterest