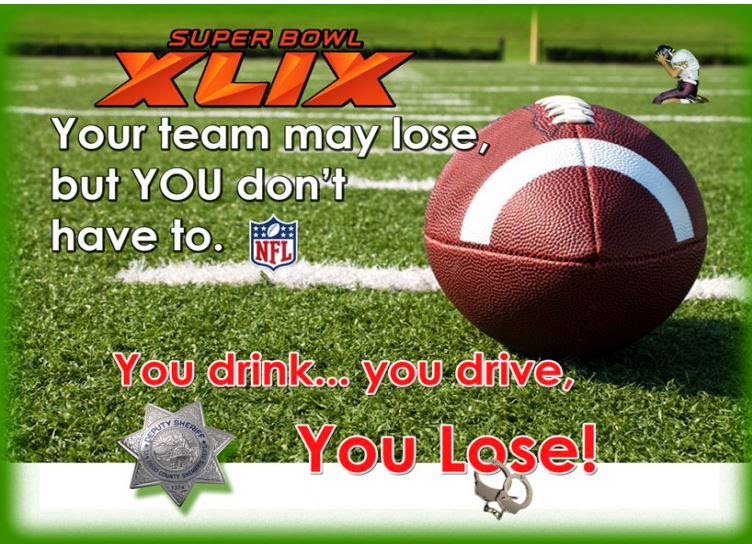 Watch for increased DUI patrols by Sheriff's Deputies across the county beginning on Sunday, February 1 at 3:00 p.m. and lasting through 5:00 a.m. the following day.

Deputies will also conduct DUI Checkpoints between 8:00 p.m. and 3:00 a.m. in the following Sheriff's contract cities leading up to Super Bowl Sunday:

In 2014, more than 1,400 people were arrested for DUI by the Sheriff's Department. In 2013, deputies arrested 1,888 people for driving under the influence of drugs or alcohol.

"There's no reason anyone should be drinking and driving," said Sheriff Bill Gore. "It's completely avoidable. Never get behind the wheel after drinking. Remember: FANS DON'T LET FANS DRIVE DRUNK!"

The Sheriff's Department has these tips for a safe Super Bowl Sunday:

• Plan a safe way home before the game begins
• Before drinking, designate a sober driver and leave
your car keys at home
• If you're impaired, use a taxi, call a sober friend or
family member or use public transportation
• If you see an impaired driver on the road, call 9-1-1
immediately

Here are some sober rider options:

If you are caught driving under the influence of drugs or alcohol, you will go to jail. To watch a public safety video on the high price of drinking and driving, follow the Sheriff's Department on VIMEO.
Email ThisBlogThis!Share to TwitterShare to FacebookShare to Pinterest