More than Baseball: Padres Exec to Speak at St. Mark’s

Handsomely boyish in appearance, an aura of baseball enthusiasm ignites his shorter stature. San Diego Padres baseball executive Alex Montoya, raises his left prosthetic arm and points beyond tiers of stadium seating toward dirt mounds where a baseball diamond should be.

“We keep our promise to the city that the Park won’t go dark when the team isn’t playing,” he says. "Other events happen here at Petco. Right now they’re setting up for a motorcycle race.”

There is much more to Alex Montoya’s story than baseball, and you are invited to hear his motivational presentation at St. Mark’s United Methodist Church, 3502 Clairemont Drive, San Diego, on Sunday, February 22 at 5:00 P.M.  Alex is the first of three renowned speakers coming to St. Mark’s in the months ahead for a series titled Conversations for the Common Good. (*see below for more information on this series).

Alex was born in Colombia, South America, in the mid-1970s, with no arms and just one leg. Though not certain, he suspects that his mother, Ines, received the drug Thalidomide to alleviate morning sickness in the early stages of her pregnancy with him. The drug was found to cause severe birth defects, but at the time, lesser-developed countries may have had supplies of Thalidomide long after it had been pulled from the market.


“My parents sent me to my Aunt Lucia in San Diego when I was four years old, hoping for a better life for me. It was a real sacrifice for them letting me go to the States to live,” Alex says. He attended Lindbergh Schweitzer Elementary School and was among the first students to be mainstreamed into regular classes.

The teachers at Lindbergh were crucial to Alex’s success. Retired Clairemont teacher, Carole McMeekin, taught this gifted, “all-around-good kid”, Alex, in her 3rd and 4th grade classrooms in 1983-84. “Everybody loved Alex, and took his severe disabilities in stride, wanting to push his wheelchair, and help him with other needs. The student body at Lindbergh knew about disabilities and accepted everyone for who they were.”

Alex’s parents feel gratified that their sacrifices were so well rewarded. “I didn't just come to the U.S. and kind of settle, or choose the easy route. I got to go to my dream university, Notre Dame, and earn a Bachelor’s Degree in Communications. Got a secondary degree, too—a Master’s in Sports Management, University of San Francisco/Orange County. I set my sights high and was able to achieve.”

Today Alex Montoya knows he’s bigger than his challenges, and revels in a career as Manager of Latino Affairs for San Diego Padres, overseeing the team’s outreach and charitable programs to the Latino community in San Diego and Mexico.

Author of two books, "Swinging for the Fences" and "The Finish Line", Alex also has an impressive list of personal, career, and civic citations to his name. He carried the torch in the 1996 Summer Olympics, and has completed several endurance races, including two San Diego Rock n’ Roll Marathon relay teams.

Here is a gentle man with deep brown eyes, a speck of sorrow in them, perhaps. But Alex Montoya lives by his axiom, “Don’t be bitter. Be Better. We all have challenges—things that will hold us back. I wake up in the morning, put on my 30 pounds of prosthetics, and say, ‘Let’s get going, got a schedule to keep!’ ” 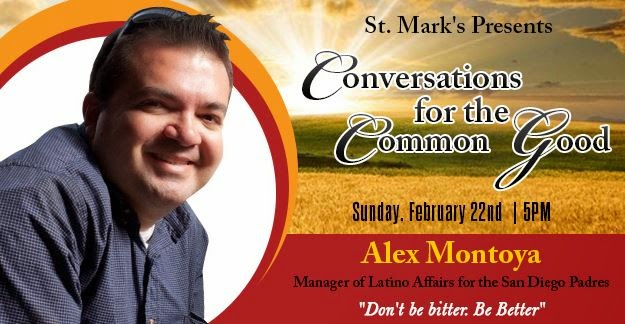 The first of the series is on Sunday, February 22 at 5:00 pm. with San Diego Padres Baseball Executive, Alex Montoya.

On Wednesday, April 15 at 6 p.m. Executive Director Tom Kohler of Chatham-Savannah Citizen Advocacy in Georgia will speak about how we impact the lives of others. He heads a community-based, non-profit organization that recruits, matches, and offers support to local people in voluntary citizen advocacy relationships.

The third in the series will be on Sunday, May 31 at 5 p.m. when we will hear #1 New York Times best-selling author and inspirational speaker, Mike Hingson. Blind since birth, he and his guide dog survived the World Trade Center attack on 9/11. A blind man teaches us what vision really means.

The church is located at 3502 Clairemont Dr., San Diego, CA 92117. For more information, call (858) 273-1480
Email ThisBlogThis!Share to TwitterShare to FacebookShare to Pinterest