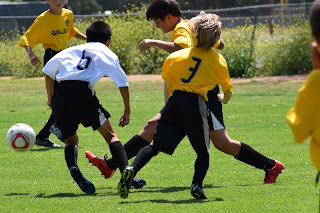 by Ben Keltner for the CC News

With the reverberations of the World Cup excitement still evident and the Women’s World Cup just beginning, the United States' interest in soccer has grown, and Clairemont is no exception.

Mesa Soccer Association allows children in Clairemont to pursue their interests in soccer.  Giving life-changing opportunities to kids 6-18 at both the club and recreational level, Mesa has allowed generations to flourish in the sport.

The Mesa Soccer Association as a whole is divided into two parts:  the Mesa Recreational side and the Nott’s Forest Club side.  The foremost goal of both is “to purse the highest quality youth soccer, while teaching respect and promoting the love of the game among our players, coaches, parents, and community.”

Mesa creates a fun alternative to the intensity of club soccer.  With teams from ages six to fourteen as well as a program called Little Nott’s where even the youngest kids are given the option to participate, this is a perfect experience for kids wanting to try out the sport.
In contrast to this, Nott’s Forest does provide a competitive option.  With between six and ten hours required each week Nott’s Forest attracts those who are looking for a more committed environment. 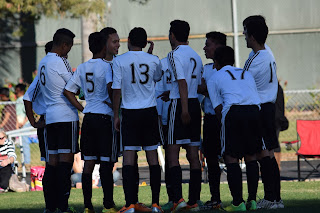 Unlike Nott’s Forest which is year-round, Mesa recreational soccer has two seasons, spring and fall. In spite of this, however, Mesa retains an outstanding atmosphere of cooperation similar to Nott’s Forest, with a more relaxed atmosphere.  Catering to a slightly younger audience, the first and foremost goal of Mesa is promoting soccer skills, teamwork, and fun.  Mesa is great for learning soccer fundamentals in an enjoyable environment and is sometimes a stepping stone to a more intense play at the club level.

On the club side of Mesa at Nott’s Forest, the kids and players involved must be extremely dedicated; however the faculty and coaches are required to be equally invested.  The director of the club, David Banks, who once played the sport himself at a professional level both in the US and abroad, is now devoted to the preservation and quality of the game.  In addition to coaching two teams himself, one of which has in past years gone on to win the State Championship, he applies himself to finding only the best coaches to preserve the club’s legacy.  Many of these have played or currently play semi pro-soccer.

In addition to this, coaches at Nott’s must have extensive coaching experience, be it with school teams or under the wings of other coaches.  The reach of the sophisticated coaching staff extends to a number of professional trainers who offer their services in both team and private workouts.  It is a truly superior staff which has reaped the fruits of the sport and now is dedicated to helping another generation do the same.

Even beyond the ideals that it endows, Nott’s Forest supports young lives in a plethora of ways.  Not only does it allow for financial aid within the club, but it is often a stepping stone to scholarships in college.  It is a great source of jobs for past and current members.  Even those as young as thirteen or fourteen can assist in coaching the Little Nott’s program.  A few years after this, youth of fifteen can be paid to referee younger kids’ games.  Those who already have graduated from the club are not exempt from these opportunities as a number of returning members have gone on to coach multiple successful teams.  The investment that one makes within Nott’s Forest is one which lasts for life. 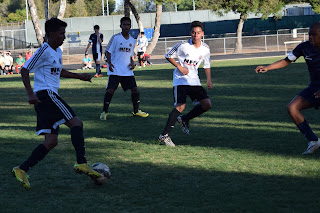 Promoting the ideals of teamwork, community, and respect, the sport of soccer goes far beyond a mere game.  In truth what it helps to accomplish is giving players a way of learning life skills they will utilize for years to come.

A member of a Mesa team said, “I learned about teamwork.  Even when my team was losing, I had fun with the other kids.”    Another player from Nott’s Forest explained, “Being on the Nott’s Forest team has taught me a lot about what’s involved with practicing and working despite the challenges.  In spite of the fact that I had not played club and it was a new experience, playing on a Nott’s team taught me to persevere and work hard and I have come a long way.”

Playing for Mesa Soccer Association is an outstanding experience which breeds the promise of better things to come.  For those considering it as an option or looking for an activity for a child, there are few things that would come higher recommended within Clairemont.  It is, in no uncertain terms, a superlative journey that will help you in any direction you go.

Ben Keltner is a homeschooling high school sophomore with Dehesa Charter School who is beginning his fifth year with Nott's Forest Football Club.  With this article he hopes to spread the word about Nott's Forest so that others may share the outstanding experience of the Mesa Soccer Association.