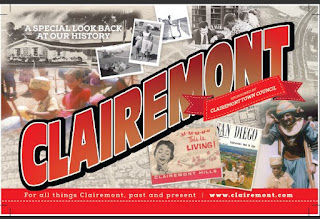 In August 2007 the Clairemont Community News printed a special edition focused on the history of Clairemont, our “Village Within the City”.

The issue was very popular, and inspired a second look at the last 50+ years in Clairemont in August 2008. I’ve been asked many times, especially at Clairemont Family Day, if I have an extra copy of either or both and I’ve been sad to say no. All the printed ones were distributed years ago.

That’s why I created a little keepsake magazine which incorporates some of the most popular stories and photos from those two issues.  If you were one of the folks who asked for a copy of the old ones, or if you never got to see them, this is for you.

The free booklet tells a bit of Clairemont's history, some of it in the form of memories from those who lived it.  There are a few fun photos of "Ye Olde Clairemont" too.

If you would like a free copy (while they last), please stop by and see me at tomorrow at Clairemont Family Day. I'll have other old photos and artifacts from Clairemont and Bay Park's past that are fun to look at and talk about. I love hearing everyone's stories of their personal Clairemont history! I'll be in a corner of the K-Co Construction booth (one of the sponsors of this project) all day tomorrow.

I want to specially thank the sponsors that helped me produce this special edition: Trisha Daly & Judy Bramer, K-Co Construction Inc., the Clairemont Town Council, the Clairemont Chamber of Commerce, Community Christian Service Agency, and Clairemont Hills Kiwanis. Thanks also to the cover artist, Lisa DeMarco of DeMarco Design, printer Brad Weber, and layout artist Dave Johnson. I hope you’ll find this a fun look back at the people and times in Clairemont’s past.
Email ThisBlogThis!Share to TwitterShare to FacebookShare to Pinterest