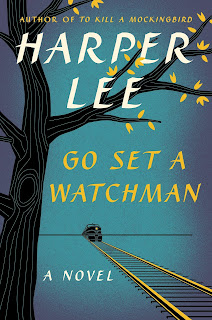 In this sequel to the internationally acclaimed novel "To Kill a Mocking Bird", Jean Louise Finch (Scout) returns to her hometown of Maybury Alabama in the midst of the Civil Rights Movement, twenty years after the trial of Tom Robinson, the centerpiece of Lee's earlier book.  After living in New York the majority of her adult life, Jean Louise finds herself aghast as her adulthood lifts the veil from her eyes in her perception of those around her.

In a story fraught with betrayal, double truths, and immoral acts of self-preservation, Jean Louise must delve into the darkest recesses of southern racism to discover how those she thought she knew wholly have deviated from the path of the righteous and compromised their morals to survive.

Harper Lee’s "Go Set a Watchman" is a cynical throwback to the Maybury that once seemed so much simpler.  Unlike its predecessor, which focused on the good in the company of the devil, this takes an antithetical approach, exploring the devil in all men.  The simple questions the book poses are: how do you fight it, how can you change it, when must you turn a blind eye, and will that cost you your soul?

In the midst of a war where friend and enemy alike are ill-defined, consorting with the enemy to avoid marginalization is an ever slippery slope walked by all who hope to make a difference in Maybury.  With many true intentions not what they may seem yet another question must be begged: how far can you go towards the darkness before you further dim the world around you?  These are the subtle compromises which Jean Louise’s unflinching morals make her struggle to comprehend, and as the answer becomes more and more apparent she must then decide whether Maybury can even be saved.

While besieged by such profound issues, the woman once known as Scout must also find a way of associating the world she was once a part of with the woman she has become.  Identity and responsibility battle for supremacy as she reintegrates into a world she had long since left behind.  In the end it comes down to a question of conscience or courtesy and ultimately there is no choice.

"Go Set a Watchman" is a riveting sequel to one of the most notable books in American history.  With bold allegories, brilliant references, and phenomenal writing, Harper Lee delves into the human experience and the moral obligations derived therein.  With a myriad of profound interpretations which can be drawn from it, "Go Set a Watchman" is yet another top class piece of literature from Harper Lee.