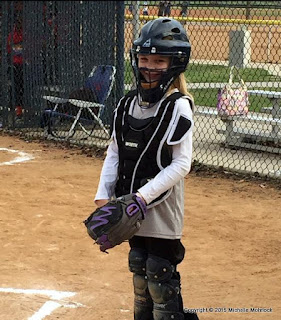 There's been plenty of good-- even great-- news for the Clairemont Girls Fastpitch
Softball League  (CGFP) this year. Three of their teams advanced beyond the state level playoffs this year, and two of the three went to nationals.

Unfortunately this week they have received some bad news: their storage container at the ball field had been broken into and almost everything of value was gone.

League president Marie Wiggins told me the hasp on the lock had been cut instead of the padlock.  "Someone casually looking at it wouldn't notice. The last time one of us was in there was 2 weeks ago," she said, "So we aren't exactly sure when it happened."

Stolen items included the utility cart used to drag the field (which is street legal and does have plates), all the teams' full equipment bags and an assortment of landscaping tools the league uses to maintain the field.

"They also took all our brand new catchers' equipment," Marie said, "which we had spent $1500 to $1800 on just last year."  CGFP provides the catchers mask and other protection as it is important safety equipment.

When I asked her who would want these items or what they could do with them if it was for the value, Marie mentioned the swap meet as a place where you might find catchers masks and the like.

As a non-profit run by almost 150 volunteers, the CGFP does not have insurance that covers this type of loss, and there is no video surveillance of the area.

The league includes 28-35 teams, comprising 300 girls from 5-16 years old. Started as Bobby Sox, the CGFP has been in existence nearly 50 years, supporting the desire of Clairemont area girls to play ball.

Right now they are in dire need of the support of their community, especially those who have played or coached throughout the years.  Marie estimates their loss at around $8,000.  They are seeking financial contributions or in-kind donations (anyone have a golf cart to donate?).