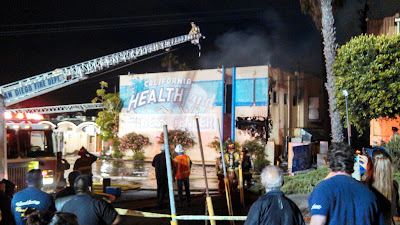 Do you remember when, 2 years ago, the old Jack LaLanne/Russian Kettlebell gym on Clairemont Drive burned to the ground in a 3-alarm fire?

People watching the fire talked to the news and shared photos on social media. There was speculation as to the cause: there were renovations going on for a rumored reopening of the gym by a young couple; could that have caused it? And what of the new owners? They never came forward, until now.

In an exclusive interview with Josh Perez, co-owner of the new TruSelf Sporting Club, I found out that it was he and his business partner Christine Quilici that were the "couple" everyone wondered about.

For the first time, Josh told the CC News that it was he and Christine, who met while working as trainers at Clairemont's Being Fit, who were amassing fitness equipment in storage for the planned opening of a TruSelf Bay Park location.  In fact, the day after the fire they had planned to finalize an order of another large number of machines, which of course was canceled.

They both continued to work with clients at Being Fit and elsewhere as they assessed their situation. "It was a matter of weeks, and it would have been ready for us to get in there," said Josh ruefully. Naturally it wasn't the time to start telling people that it had been Josh and Christine who'd been about to open on Clairemont Drive.

Fast forward to July 2015. The happy news is that the two lost about 9 months of time but did find another great location. Their TruSelf Sporting Club at 5125 Waring Rd., San Diego, CA 92120 offers an amazing variety of options for getting and staying fit. Machines, free weights, group classes and of course personal training are all offered in the spanking clean and modern facility. Best of all, it is entirely self-financed so they have no debt and no investors trying to run the show.

During their time in Clairemont, they observed many aspects of the gym that they knew they could do better, and that's exactly what TruSelf Sporting Club is - a fitness center 'done better'.

"All of our membership plans are all month to month with no contracts. We do offer pre-paid options but we don't have annual renewals or cancellation fees, " Josh explained when asked what makes TruSelf a better place to work out. "We also take great pride in the professionalism and top rated certifications and advanced education of our staff."

They also don't believe in paying a premium price for specialty classes, as most studios will charge upwards of $99 for certain classes.  Their members have TRX, yoga, cycling, Pilates and more, all included.

If you had worked out with Christine or Josh and wondered where they went, you will be glad to know they are doing their thing in a great new location.  They welcome ALL their friends and those that knew them to come and visit them in their brand new location.

By mentioning this article, visitors will receive free one month trial and two complimentary workouts with our Nationally Recognized Personal Trainers at TruSelf Sporting Club!

Congratulations to two hard-working people who made their dream come true!