Herbs and Spices: Not Just for Cooking 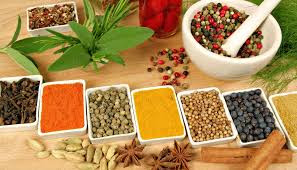 Back in the day, long before synthetic drugs invented, people used herbs and spices to treat almost all ailments. Nowadays, when we think of herbs we think of cooking. The right herbal seasonings or spices can help bring out the natural taste or add to the flavor or your favorite dish.

Sometimes people use herbs such as golden seal or echinacea to make a tea to help with sleep or a cold/flu. These are not the kind of herbs found in the pantry to cook with; these are the kinds of herbs sold in health food stores and sought out for their medicinal benefits.

Did you know that some of the herbs and spices you do cook with can have medicinal properties as well? Here are 5 common herbs/spices and their uses in Asian medicine:


Black Pepper – This is the most common condiment I see almost every American pour all over their food covering their steaks in a hail of dark peppery sprinkles.  This is a really important herb and in most texts called the “King of Spices”.  Black pepper is native to India; it had a high value to the Europeans since the Roman times.  Europeans often used black pepper as a form of collateral or currency and considered it a luxury item only used by the rich.

Turmeric – I know most of the non-Asian people reading this are saying to themselves "This isn’t a common spice in my pantry". San Diego has a large Asian population and this is a fairly common spice in Asian homes.  Anyone who has eaten Indian or Thai food has likely eaten it as turmeric is the main spice in South Asian dishes.  It is one spice that never really caught on with European cultures historically.  The Ancient Greeks mentioned it in passing and Marco Polo called it Indian or yellow saffron and thought it was only used as a dye for clothing.

The Chinese and Indian use Turmeric as a calmative to ease digestion.  It was also used to hasten healing from injuries, treat and heal chronic sores, pain in the chest, abdomen, and menstrual pain.  It also treats nose bleeding, vomiting with blood, and blood in the urine. Treats gallbladder disorders and jaundice.

In the mid 20th century scientists from the U.S and Europe found the main ingredient, curcumin, has a high anti-inflammatory response in animal studies.  Also it protected the liver and gall bladder from inflammatory diseases. It is not only an anti-inflammatory agent, it is also anti-choleric, and antimicrobial.

This is a great anti-inflammatory spice and for people suffering from inflammation this spice is highly recommended.  This is not a pharmaceutical drug so for it to work properly you would have to saturate you system with it for it to take affect.  I recommend adding it to your food when cooking. Also you can find curcumin capsules at your local vitamin store as well.

Ginger - This common herb has the longest recorded use going back 5,000 years in Asian herbal medicine. It is heavily used by the Indians and Chinese as the top herb for almost all ailments.

I often hear people at sushi restaurants mistakenly say this herb is part of their meal to clear the taste palate. That's wrong; it is a natural antibiotic and anti-parasitic herb. It is served with sushi as a preventative with eating raw fish.

This is the king herb when it comes to nausea and vomiting caused by cancer, morning sickness, surgery, or motion sickness. That is because it is an antispasmodic and calms the stomach. It stops stomach pain, relieves pain caused by gas, increases blood circulation for hypotensive people, relieves arthritis, stops cough, clears phlegm from the lungs and throat.  Sometimes it is used to treat chest pains and back pains.

Cumin –This favorite taco seasoning is also found in Mediterranean and Indian food as well.
Cumin was fist recorded in ancient Egypt, it was used to treat pallor face and treat and upset stomach and flatulence by improving the digestive system.

With combination of other herbs, it is used to treat muscle pain and healing stitches. Cumin essential oil in strong doses is a sedative and can help calm the nerves. Gargled can help with laryngitis.

This spice was so valued by the ancient Christians, the bible states cumin could be used in place of money when giving the church tithe. Modern studies have found cumin protects against memory loss and the damage caused by stress on the body. Another study found cumin to be a more effective antioxidant than vitamin C.  Other lab studies found it may have a role in fighting cancer, increases insulin sensitivity, and anti-asthmatics by being a bronchodilator.

Rosemary – This is one of my favorite aromatic herbs.  It grows all over San Diego and one of the best tasting and fragrant herbs in my opinion.  You often see a sprig of it on the side of your favorite meat dish or sprinkled on mashed potatoes.

This is another herb with a long history that dates back to ancient Egypt. It is popular in Mediterranean dishes and used in the ancient times to “ward of evils in the body”, cure poor digestion, migraine, joint disorders and muscle aches.  Queen Elizabeth of Hungary drank water with rosemary in it for painful joints and found it cured her semi-paralysis.

Today we know that rosemary contains salicylic acid, the same ingredient in aspirin. This is why it was known for treating muscle pain, migraines and joint pains.

Rosemary is also an antibacterial and antimicrobial and used to treat skin conditions like dandruff.  It also has anti-cancer effects by stopping carcinogenic chemicals from binding to cellular DNA. Studies show a chemical in rosemary prevents the degeneration of acetylcholine; a chemical the brain needs for normal neurotransmission, hence prevents and treats Alzheimer.


Geno Diveley is the co-owner of Acujin Holistic Therapies.  He is a licensed acupuncturist with 25+ years in the holistic health field.