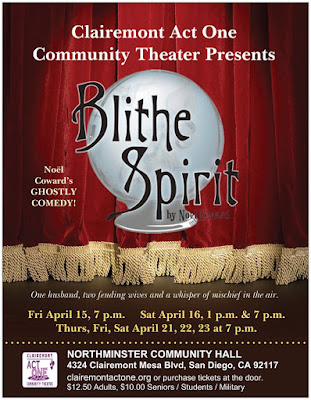 Join Clairemont Act One for the last show of the season, the award-winning comedy "Blithe Spirit" by Noel Coward.

Playing on stage, film and radio since 1941, the play concerns the socialite and novelist Charles Condomine.  Hoping to gather research for his new novel, Charles invites the eccentric medium and clairvoyant Madame Arcati to his house for a séance.

While consumed in a trance, Madame Arcati unwittingly summons the ghost of Charles’ dead wife Elvira, who only Charles can see.  Elvira soon makes a play to reclaim her husband despite Charles’ new (and very much alive) wife Ruth. Now if he wants his latest marriage to stand a GHOST of a chance, he better conjure up a solution quickly!

One husband, two feuding wives and a whisper of mischief in the air – who will win in Coward’s other-worldly comedy?