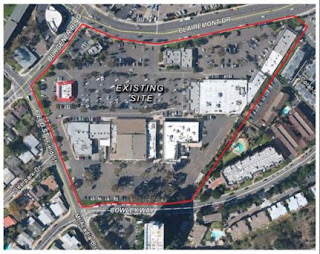 Every so often the rumor mill gets going on Nextdoor or Facebook in regard to the redevelopment of the Clairemont Village shopping center, at the corner of Clairemont Drive and Burgener Boulevard.

In January of 2014 Kleege Enterprises, owner of the property, presented a preliminary plan for adding some residential units along with updating the retail portion. The images shown were informational only, a way to give the community a preview of what they had in mind in the long term.

There have been no announcements or updated plans shared so when Hometown Buffet's corporate office closed the Clairemont location, the rumors started flying again. The one that has many people up in arms is that Keil's is leaving so a WalMart can move in and take over the entire end of the center.

Since the folks at Kleege Enterprises are local, and have been open to talking in the past, I checked in with my contact there to see what news there was to share.

I spoke to Chris Smith who is one of the partners in the company that owns the shopping center. He told me that although at some point they do want to have a residential component on the property, right now they are concentrating on the retail portion.

What they are doing now is spending time (and money) determining what they can do with the buildings and property. As we all know, they are old buildings (60+ years) so there needs to be a good deal of research and any number of inspections before they will know what can be updated and what must be rebuilt.

The dirt that will be disturbed by any major construction has to be analyzed first as well. In addition, new environmental rules require that no storm water can run off the property, and that all storm water must be cleaned on site. These rules have been updated recently so the previous plans the company made to handle storm water now need to be revised to accommodate the changes.

In the meantime, they are talking to all of their tenants, and hope to keep as many as they can.

When I told Mr. Smith that many people are concerned about Keil's leaving, in favor of a WalMart, he stated there are no absolutely no plans for a WalMart. As far as Keil's goes, Mr. Smith had just had dinner with the owner, Rick Keil, and they continue to talk about the future of the store and the center as a whole.

Mr. Smith assured me that Kleege will be bringing their plans to the community when they are firmed up.